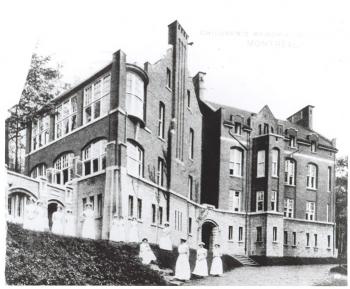 Putting the needs of children first

The Children's Memorial Hospital first opened its doors on January 30, 1904, on Guy Street in Montreal. It was a bilingual institution and the first hospital in Montreal with the sole mandate of caring for sick children.

The hospital established its reputation as a pioneer in pediatric medicine during this era, when many children fell ill with infectious diseases such as typhoid fever, tuberculosis and polio. In 1909, the growing number of patients required a move to a new location on Cedar Avenue. In 1920, the Children's became a teaching hospital affiliated with McGill University, beginning a relationship that has resulted in a dynamic and successful teaching and research environment over the years. Recognizing the link between children's health and their home environment, in 1926 the hospital became the first in Canada to establish a Social Services Department to support the family.

The hospital and its services continued to grow steadily, establishing notable firsts: the first speech therapy clinic in a pediatric hospital in 1933, the first division of medical genetics in 1949 and the first psychiatry department in 1950. The growth of services required another expansion and move in 1956, when The Children's Memorial moved to 2300 Tupper and became the Montreal Children's Hospital / L'Hôpital de Montréal pour enfants.

1960-1999: Technology booms, but caring remains at the forefront

The Children's was now known as a full-service teaching hospital. With the integration of new imaging technology such as the first CT scan in a Canadian pediatric setting in 1977, brain mapping and ultrasound technology in 1980 and magnetic resonance imaging in 1994, specialties such as cardiology and cardiac surgery, genetics, trauma care, neurology and neurosurgery, psychiatry and orthopedics evolved dramatically. Technology also had a profound impact on research and clinical care.

As Montreal's population changed, so did the needs of the patients. In 1985, the MCH created the first hospital-wide multiculturalism program in Canada. Since then, the Multicultural Clinic has also been established.

After five years of joint study and research on future healthcare models, the Children's led the formation of an innovative partnership dedicated to offering the best possible care to patients on a lifetime basis. In August 1997, The Montreal Children's Hospital joined with the Royal Victoria Hospital, the Montreal General Hospital, the Montreal Neurological Institute and Hospital and the Chest Institute to form the McGill University Health Centre (in April of 2008, the Lachine Hospital and Camille-Lefebvre Pavillion became members of the MUHC). 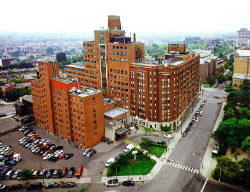 The Children's has been a leader in extraordinary events in pediatric medicine. In 2000, the MCH delivered the first baby in Quebec using the EXIT (ex-utero intrapartum treatment) procedure. Another Canadian first came in 2002 when a mechanical heart, called the Berlin Heart, was used successfully as a bridge to transplant on the youngest patient ever in North America.

The MCH continues to lead the development of innovative programs and services. One notable example is Telehealth, which allows MCH experts to consult, teach and even provide therapy to children in remote areas long distances from the hospital.

On May 24, 2015,  the Montreal Children's Hospital moved to its new home at the McGill University Health Centre's Glen site.