Hearing and vision: the must-pass exams 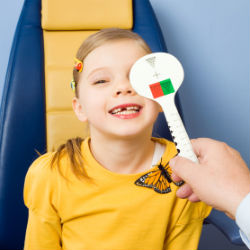 According to Barbara Zavalkoff, a Montreal Children's Hospital (MCH) audiologist, some of our children are literally tuning us out. "On any given day, 25 per cent of primary-school children may not be hearing well," she says. Similarly, many of these young learners, can't see the blackboard. More than five per cent of students have undiagnosed vision problems, according to MCH ophthalmologist Dr. Rosanne Superstein.

To get an early start in diagnosing hearing difficulties Zavalkoff and her colleagues at the MCH, Royal Victoria Hospital (RVH), and the Jewish General Hospital have implemented hearing tests for all babies who are in neonatal intensive care units (NICUs). According to Zavalkoff these babies are more likely to be at risk for hearing difficulties. However, this is only the first step in the longterm goal of screening all babies. "We realize that if you only test babies in the NICU, you pick up only 50 per cent of infants who have a hearing loss."

If hearing loss is left undiagnosed, the consequences can be serious. From the moment we are born, the brain adapts to the task of processing language and speech. "If the child misses this developmental window, they may have a hard time catching up," says Zavalkoff. She knows a number of examples, where parents have brought their children to speech pathologists, only to realize it is actually their hearing that is at fault. "Hearing loss is the number one inherited disorder, one that is impossible for parents to pick up on their own," she says. Thanks to a donation from the Linetsky family and the MCH Foundation, new automated Auditory Brainstem Response (ABR) technology was recently purchased, which will enhance the existing screening facilities at the MCH.

Premature babies are also at risk for visual problems such as retinopathy of prematurity (ROP), a condition where the blood vessels to the eye develop abnormally. "The younger and smaller the baby, the greater the risk for ROP," says Superstein. "ROP may result with severe visual sequelae such as, retinal detachment and blindness. However, if this condition is identified early, treatment is usually successful." All NICU babies at the MCH and RVH are screened frequently for this and closely watched. "A lot of energy goes into these babies," says Superstein.

"It is very important to pick up vision problems at a young age, because the visual system develops from birth to eight years of age. If a clear image is not projected onto retina during this time, the visual pathways between the eyeballs and brain will not form properly. This becomes irreversible after a certain age and cannot be corrected," says Superstein. In the case of vision, parents may be able to spot problems. Newborns should be able to see and by eight weeks they should be able to track their parent's face with their eyes. Signs that a child may have vision problems include:

How does it work? A probe placed in the ear produces a tone and a microphone measures the sound, which echoes back. This test detects for an abnormality in the machinery of the ear - from the outer ear to the cochlea.

How does it work? A probe placed in the ear produces a tone and the brainwave reaction is recorded. This test detects damage in the ear, closer to the brain - from the cochlea to the brainstem.