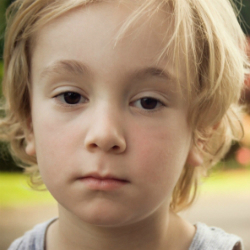 Depression is more than just feeling sad, says child and adolescent psychiatrist David Fassler, M.D. In depression, sadness persists, the feelings are too intense and they interfere with the child's life.

Depression in the young can be difficult to diagnose, hidden by attention deficit/hyperactivity disorder, behavioral and emotional problems, substance abuse or learning disabilities.

If parents suspect a child has clinical depression, experts say, they should take notes on the behavior and seek help from mental health professionals or organizations.

Failure to thrive
Psychotherapy has been successful in treating depression in children. Although antidepressants also have been used to treat depression in children, the Food and Drug Administration issued a warning in September 2004 that antidepressants not only cause some children and teenagers to become suicidal but that most have also failed to cure their depression. Children and teens who take antidepressants are twice as likely as those given placebos to become suicidal. Still, the overall risk for suicide is low. If 100 patients are given the drugs, two or three more will become suicidal than would have had they been given placebos.