Should we let them believe in Santa? | Montreal Children's Hospital

Should we let them believe in Santa? 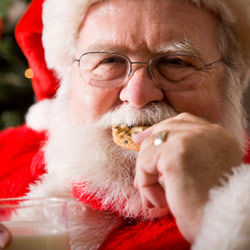 According to a survey on www.canoe.com, 86 per cent of parents believe that we should hold on to this belief. For many of us, it’s a way to keep the magic of Christmas and to create a certain connection with children by reliving our own childhood memories. It’s also an easy way to show young children examples of kindness and generosity.

Young children have active imaginations. They have invisible friends, there are monsters under the bed, there are fairies and princesses who, like Santa Claus, will one day become fictional when the child is ready to accept it. Until then, all these imaginary characters allow children to develop their creativity and we should let these things run their course. After all, it’s that kind of imagination which has given us so many great works of literature and film.

What’s more, Santa Claus is part of our traditions and even adults like to keep the myth alive. Children aren’t gullible and older children might even seem that they still believe. Many parents remember the moment they realized that it was Uncle Jim behind the fake white beard or when they first saw their parents secretly wrapping the presents. But the following year, even though Uncle Jim was back in his costume they didn’t say anything.

One day your child will ask the question and that’s when you can explain that it’s a way to keep the magic in the family tradition.
Avoid disappointment and don’t lie

Without a doubt there is an abundance of Santa Claus images everywhere. They’re on practically every street corner and in every shopping centre creating the illusion that everything is fair and just when we all know that there are children all over the world who won’t get anything under the tree. It would be easy to conclude that Santa is more generous with people who are well off than with those who have little.
Even if you want to preserve the myth, there will always be someone – an older child, a cousin –who will end up telling your child that that the jolly old man with the white beard as we know him is a saint that the Coca-Cola Company crafted into a new image in a red and white costume. And there you have it... disappointment. How do you explain to your child that you’ve been building a lie? We all feel it’s important to teach children that they shouldn’t lie but that’s exactly what we’re doing when we make them believe in Santa Claus or the Tooth Fairy.
What’s more if all the presents that children receive at Christmas are the result of their parents working hard and saving money then why let them think that Santa Claus brought everything instead of their parents who they adore and who take care of them? Or what about if the family is going through a difficult time – even if the child was ‘nice’, how do we explain why Santa Claus wasn’t that generous?
To these questions, you can also add the arguments put forth by parents whose religious beliefs mean they don’t want to promote the Santa Claus image. They think of Christmas as the celebration of the birth of Christ, therefore Santa Claus should not really be celebrated. In families where the parents come from two different religions, the idea of Santa might become a source of conflict.
The origins of Santa Claus

The origins of Santa Claus

Whether you decide to preserve the myth of Santa Claus or not, the time will come when your child will ask you about it. Here are a few historical facts:
Santa Claus finds its origins in Saint Nicolas Myre, a saint who, according to legend, saved the lives of three children. It’s also connected to several images from other cultures including Julenisse, a nordic elf that delivers presents during Midtvintersblot, a celebration marking the middle of winter. There’s the Celtic god Gargan, and the Viking god Odin who came down to give gifts to Scandinavian children. It was during the Middle Ages that the Catholic church replaced the pagan figures that were part of the winter celebrations with that of Saint Nicolas. The Santa Claus image has evolved and become the symbol of Christmas throughout the west and there are different variations depending on the country and the climate. Santa leaves gifts in either stockings or shoes… you’ll see him on a surfboard in Australia… according to the Danes he lives in Greenland while Americans hold the tradition that he lives in the North Pole.
Give health. Donate now