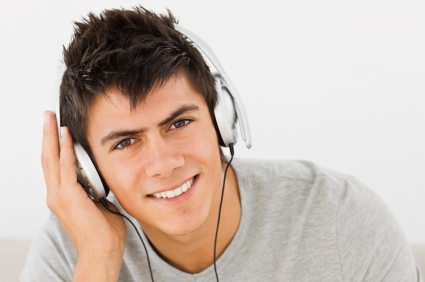 If the person standing beside you can hear the music playing on your MP3 player then it’s too @#$)*%& loud! And you may be permanently damaging your hearing. Yeah! You heard me…you’re making yourself deaf.

Barbara Zavalkoff an audiologist at The Montreal Children’s Hospital of the MUHC is concerned that teenagers are doing irreparable damage to their hearing. “Thanks to longer lasting batteries and music libraries with 1000 plus songs, kids are putting on earphones in the morning and taking them off at bedtime. They are bombarding their ears with loud music for hours every single day, and as a result are suffering from music induced hearing lose,” says Ms. Zavalkoff.

Music induced hearing lose is caused by two factors: the volume of the music and the duration of the exposure to the noise, um, music. Ms. Zavalkoff points out that listening to any sound over 85 decibels or higher for a long period of time will permanently damage your hearing.

You might be wondering just how loud an MP3 player can play. Well, a test by the American Speech-Language-Hearing Association (ASHA) showed that at its peak volume, MP3 players can hit 120 decibels. This is about as loud as a chainsaw or a jackhammer. It is only safe to listen to something that loud for about eight seconds.

The situation is being aggravated by so called ear buds, those tiny speakers that fit snuggly in your ear and blast music directly at your eardrum. Using ear buds as opposed to headphones that sit on the outside of your ear, raises the volume an additional seven to nine decibels.

A survey commissioned by the ASHA found that more than half of high school students polled have lost some hearing because of how they use MP3 players.

Ms. Zalvalkoff points out that no one really knows how much damage MP3 players are causing, because it generally takes several years before noise damage becomes noticeable. She predicts we will see a generation of people suffering from hearing loss in their 30s rather than their 60s. Ms. Zalvalkoff has sound advice to prevent music induced hearing loss: turn down the volume (play your MP3 at no more than 60 percent of its maximum volume), and don’t listen to music for more than 60 minutes. WHAT?!?


Have you permanently damaged your hearing?

You may have caused permanent damage to your hearing if: