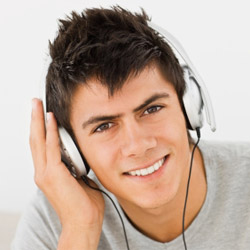 By Anne-Marie Hurteau, m.o.a.
Audiologist - MCH
Audiologists believe tens of thousands of young people are likely to suffer from loss of hearing in later life by using their iPod/MP3 players. Most people are listening to their iPod/MP3 on public transport to drown out the noise of traffic, but to do this they turn their volume up to quite dangerous levels.  Technology that provides audio through ear buds or earphones may be hammering the hearing of everyone who uses it, reports the American Speech-Language-Hearing Association (ASHA, 2007). The concerns stem from the way technology has marched on since the iPod/MP3 technology was introduced on the market.

iPod/MP3 technology offers a huge hard drive that is capable of generating very loud levels of music, carrying a wide song selection, and a longer battery life than the preceding generation of personal stereos such as the Walkman or CD players.

Therefore this advanced technology allows users to listen to loud music for longer period of time exposing their ears to more damaging noise levels.  The use of ear buds earphones as opposed to traditional over the ear earphones is also a factor that increases the risk of traumatic noise exposures. These ear buds earphones have the capacity of generating sound levels up to 120 decibels.  Since they do not cut the incoming outside noises people tend to increase the volumes of the music players even more. This traumatic exposure to loud noises has the same permanent effects on the ears than the noise generated in loud factories or an explosion.
Hearing loss

The inner ear is an organ that contains thousands of sensory cells called the Hair Cells.  When continuously exposed to loud stimulation, these cells get tired and cannot transmit the sounds to the brain normally.  Only after a minimal rest period can these cells return to their normal function.  This phenomenon is called temporary noise induced hearing loss.  If the inner ear does not have sufficient time to recover after being exposed to loud sounds, the hair cells will eventually be permanently non-functioning and the person will have a permanent noise induced hearing loss. Research shows that 16% of 6 to 19 year olds have early signs of hearing loss including tinnitus (whistling or buzzing in the ears) from exposures to loud noise levels.

Denying the danger of noise-induced hearing loss would not be so hard if loud music would make the ears bleed, but the early symptoms tend to arise gradually. People may notice that voices sound muffled, and that they have a reduced ability to follow a conversation in a noisy environment such as a restaurant or a party. They might hear occasional or continuous ringing in their ears. In its worst form, the ringing can get so loud that it interferes with sleep.  The hearing problem may become quite advanced before people realize they're having serious difficulty hearing.  This form of hearing loss is permanent and is not treatable.

Therefore a general agreement stands for recommending this rule to any iPods/MP3 users:  Never listen to music at a level exceeding 60% of the volume control for more than 60 minutes at a time.  When exposed to loud levels of noises: Turn it down! Walk away!  Or protect your ears!
Reviewed by Trauma specialists at the Montreal Children’s Hospital.
Last updated: July 2013
Give health. Donate now

The Audiology department is part of Brain Development & Behavior.

Please follow the instructions for referral on the Central Intake webpage and send it by: