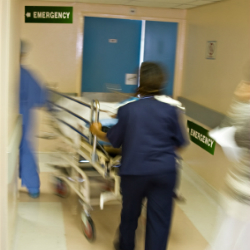 We want to know whether we can identify visual perception and balance problems in children and adolescents who have sustained a mild head injury or concussion.

We are assessing children with mild head injuries and children without head injuries over a one year period to see whether they have problems and when these problems resolve. Children are seen 3 times over the 12 month-period and each time we evaluate them using various tests focusing on the perception of visual stimuli and in a virtual reality setting to better assess their balance.

How was this project funded?

This project is funded by a research grant from the Canadian Institutes of Health Research.

When will we have results?

We are currently analyzing data collected for this project and we expect to present results from this study sometime in 2015.

2. Relationship between Balance and Self-Efficacy Related to Physical Activities in Children with an MTBI

We wanted to know whether we can identify balance problems or lack of confidence upon return to sports in children who have fully recovered after sustaining a mild traumatic brain injury or concussion.

We were assessing children once fully recovered from a mild traumatic brain injury and children without head injury to see how their balance skills and self-confidence may impact their return to physical activities. Children with a mTBI were evaluated at time of discharge from physiotherapy and then interviewed 2 weeks later. Testing focused on their balance and confidence level when particpating in physical activities.

How was the project funded?

What are the results?

Some balance difficulties tend to outlast post-concussive symptoms and can be detected using various measures of balance in children after a mild traumatic brain injury.

How was the project funded?

This project was funded through internal funds at the MUHC.

What are the results?

4. Post-concussion symptoms as a marker of delayed recovery in children and youth who recently suffered a mild traumatic brain injury (MTBI)

Through a retrospective cohort study design, based on the Montreal Children's Hospital Concussion Clinic databse, a predictive model of delayed recovery was established for patients seen at 10 days post-concussion.Variables such as, post-concussion symptoms, medical history, gender, age, history of concussion, sleep disturbances, anxiety, learning disabilities, attention problems and depression were used in order to find the best predictive model of delayed recovery.

How was this project funded?

This project was funded through internal funds

What were the results?

The project started in 2013 and the results have been presented at various conferences. A scientific article is currently under review.