After 4.5 years on dialysis, teenager sees his life changed, thanks to a kidney swap | Montreal Children's Hospital

After 4.5 years on dialysis, teenager sees his life changed, thanks to a kidney swap

A clothing swap, friends exchange clothes. But what about a kidney swap? This is when a group of strangers exchange kidneys. A kidney swap, or kidney exchange, took place in Montreal earlier this year, giving Halil’s life a reboot.

From age 12 to 17, Halil was a regular fixture at the Montreal Children’s Hospital (MCH). Three days a week for five hours, he was plugged into a life-saving dialysis machine that removed waste products and excess fluid from his blood. Year after year, he waited and waited for a kidney transplant.

The symptoms started when Halil was in kindergarten – nausea, vomiting, fatigue. He was in and out of his pediatrician’s office, but the cause of his ailments remained elusive. In 2017, at the start of high school, his symptoms intensified and severe cramping compounded his misery.

A blood test returned alarming results. His doctor advised his parents to take him to the MCH as soon as possible. The 12-year-old was in acute kidney failure and about to have a heart attack. Halil virtually skipped the emergency department, landing in the intensive care unit.

This was the start of his 4.5 years of dialysis.

Halil has a rare genetic mutation that triggered kidney disease and eventually kidney failure. Dialysis would keep him alive, but a new kidney would give him a life.

The teen’s mom, Aysegul, and dad, Sevket, wanted to donate a kidney, but his mom’s blood type made her an incompatible donor. His dad underwent tests only to discover he had diabetes and couldn’t spare a kidney.

As soon as the MCH discovered his parents couldn't donate to Halil, he was placed on the waitlist for a deceased donor kidney.The average patient in Canada will wait nearly four years for a kidney. 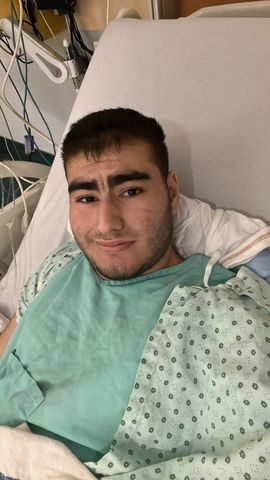 The impact of the pandemic

Then in March 2020, the world shut down. The World Health Organization officially declared COVID-19 a pandemic.

The pandemic has had a severe impact on organ donations and transplants.

Transplant Québec estimates it caused organ donations and transplants to drop by 20 per cent in 2020. The MCH was no exception. The lockdown forced the hospital to stop and start its transplant program. Plus, there was an organ shortage. Through it all, Halil and his family could only wait.

Finally, in May 2021, a deceased donor kidney with a compatible blood type became available. Halil was prepped for surgery, but the procedure was halted at the last minute. Before transplantation, one of the final steps is comparing the organ and recipient's human leukocyte antigen (HLA) antibodies. They didn't match, which meant Halil’s immune system would likely reject the new organ. Halil and his family were devastated.

Halil was about to turn 17. At 18, he would age out of pediatric care at the MCH and be transferred to adult care. Children under age 18 are given priority for transplantation in Quebec. Once in adult care, Halil would be placed on the adult transplant list, which is a much longer wait.

Dr. Indra Gupta, a nephrologist at the MCH, and Halil's physician, brought Canada’s Kidney Paired Donation Program to the family’s attention. This interprovincial program, managed by Canadian Blood Services, started in 2009. A paired kidney exchange, also known as a "kidney swap," occurs when a living kidney donor is incompatible with the recipient but does match another person on the waitlist.

The program would allow Halil’s mom to donate a kidney to an unknown compatible recipient and her son to receive a kidney from an anonymous compatible donor. These swaps can sometimes extend into large chains of donor pairs, potentially increasing the donation's impact further. In Halil’s case, the chain had three links. Three donors gave one of their kidneys to three people on the transplant waitlist. The donors and recipients all live in the greater Montreal area.

This is only the third time the MCH has had a patient and donor participate in a kidney swap.

Organizing the surgeries for a kidney swap is a logistical feat, particularly during a pandemic. The surgeries took place at the MCH, the Royal Victoria Hospital, the CHUM, and Hôpital Maisonneuve-Rosemont. Each hospital has to have an OR available, ensure the availability of post-op monitoring and have transplant surgeons, anesthesiologists and other health professionals at the ready.

Halil's mom bounced back from her surgery, and today feels perfectly fine. Halil spent two weeks in hospital, including a couple of days in intensive care. Post-surgery, he immediately felt better.

Today, he only comes to the hospital once a week for a quick 30-minuted exam with Dr. Gupta and Angela Burns, the MCH transplant nurse, to ensure against organ rejection. He still feels tired, but this will likely diminish as his healthcare team fine-tunes his medications. He looks forward to starting CEGEP in August. His experience as a patient at the MCH has him considering a career in medicine.

As for Halil's donor, he or she remains anonymous to him. Same for the recipient of Aysegul's kidney. While the names of the other donors and recipients stay a mystery, we do know this swap shared the gift of life.

A huge thank you to everyone who supports the MCH Foundation. Your donations fund the MCH Nephrology Program and Dr. Gupta’s research, which focuses on understanding the basis for congenital defects in the kidneys and urinary tracts.