Any helmet is better than no helmet, but ski helmets offer limited protection: study 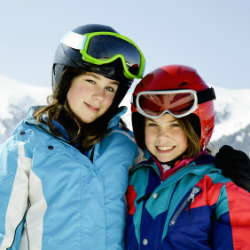 Tuesday, January 24, 2012 - 09:51
Reposted from montrealgazette.com
Parents who reach for a ski helmet when their children are going tobogganing may not be making the safest choice, a new study shows.
The study from the University of Ottawa and the Children’s Hospital of Eastern Ontario shows that hockey helmets performed better than ski helmets in most instances of crashes - and even bicycle helmets performed better at high velocities.
“Alpine helmets had limited effectiveness at both the low and high velocity impacts,” the study concluded.

However, any helmet is better than no helmet - there’s no doubt about that, even though only about 5 per cent of kids who go tobogganing wear a helmet, according to the study which was published in the Journal of Neurosurgery: Pediatrics.

The doctors who led the study said the results point to a real need for the development of a new multi-impact helmet for winter sports - and the need for some improvements to ski helmets in general.

“I think ski helmets could do better,” said Dr. Blaine Hoshizaki, director of the Neurotrauma Impact Laboratory at the University of Ottawa. “There’s no reason they couldn’t be a little thicker. Even one-eighth of an inch would be better.”

Hoshizaki and Dr. Michael Vassilyadi from the CHEO tested three types of helmets that children aged seven and under might wear to go tobogganing: ski, hockey and bicycle helmets. They were impacted at 2.0, 4.0, 6.0 and 8.0 metres per second at the front and side to simulate the kind of impact a child might experience while sledding.

While the hockey helmet did best at every speed except 8.0, Hoshizaki said a ski helmet should have done better, particularly at 6.0.

“This really showed that alpine helmets could be more protective,” said Hoshizaki.

“I was taken aback by the performance of the alpine helmet,” said Vassilyadi.

But he cautioned parents who now think a bicycle helmet is a great idea for tobogganing - once you put even a thin hat under it, the bicycle helmet becomes almost useless.

The study comes on the tail of a study from the Université de Montréal last week which showed that concussions are a regular occurrence in winter sports and parents are making a mistake if they believe their children are resilient enough to “play through” a head injury.

The study found that not only were the concussions of children as serious and longlasting as those of adults, but the concussions suffered by adolescents had the most serious consequences of all.

Debbie Friedman, director of the Montreal Children’s Hospital Trauma Centre, said children should be wearing helmets for all winter sports. The centre sees about 200 skating injuries a year, 150 snowboarding injuries, 140 skiing injuries and 120 tobogganing injuries a year; about half of all those injuries are concussions, she said.

Innovative companies are trying to help parents and coaches deal with reality of concussions and a growing realization they can have very serious repercussions, as anyone following the hockey career of Sidney Crosby knows. Ottawa-based Impakt Protective has developed Shockbox helmet impact sensors that can alert a coach (or parent) to the severity of a blow on the ice so a player can be pulled if necessary.

“Concussion symptoms often appear after the impact so this lets a coach know how hard a player has been hit,” said Danny Crossman, CEO of the company.

He developed the device for the British and U.S. armies, to measure blast acceleration. With a focus now on hockey and football, said Crossman, he’s just moved from one war zone to another.