The best time of the year | Montreal Children's Hospital

The best time of the year 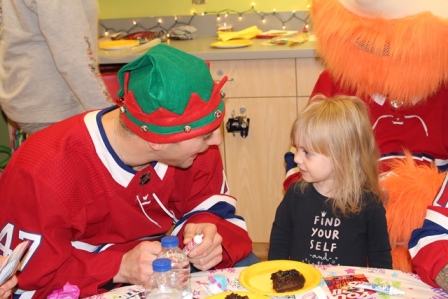 December 12 was a special day at the Montreal Children’s Hospital. The Montreal Canadiens visited the Children’s for their annual visit – a tradition that was started by Jean Béliveau almost 70 years ago. Players visited patients in all the inpatient units and even stopped by pet therapy, where they spent time with MCH patient Anthony Sheinart. Up on B9, Kenny Agostino, Jonathan Drouin, and Tomas Tatar, enjoyed decorating brownies with patients, while three-year-old Francesca Chevalier stole the show with a choreographed dance routine.

“Our patients and families love this visit,” says child life specialist, Judy Edes. “It makes them feel really special, and I can tell the players get a lot out of it too.” Seventeen-year-old Marie-Sophie Forget-Labonté helped Judy organize the afternoon activity. She planned out the brownie recipe, helped Judy bake hours before the visit, and made sure other patients knew about the event. Marie-Sophie is currently being hospitalized for superior mesenteric artery syndrome, a digestive condition that impedes food from entering the body properly, because of a kink in the intestines.

“She really wanted to plan something special for the other patients,” says Judy. “It’s fun when you get to generate new ideas and be creative with your patients. It’s very inspiring. As much as we give to the patients, we get a lot back from them in return.”

Over on B8, Jordie Benn, Max Domi, and Antti Niemi loved meeting nine-year-old Aksel. The young boy started talking last week after undergoing brain surgery. He was excited about meeting the Habs and receiving a Youppi! doll. “You could tell the players had a really good time and thought Aksel was hilarious. They left the room smiling,” says Marie-Claude Proulx, the MCH’s patient and family-centered care coordinator. And in Billie’s room, her grandfather André, was the one who was beyond excited. As a diehard Habs fan, André was beaming with joy and couldn’t wait to meet the players.

Jesperi Kotkaniemi, Artturi Lehkonen, and Andrew Shaw rounded out the visit with trips to oncology, psychiatry and the neonatal intensive care unit (NICU). Andrew Shaw was especially touched by the NICU, because he has a six-month-old daughter at home. He even took the time to talk to parents and ask them how they’re doing. The group also spent time talking to psychiatry patients in the unit’s kitchen and 18-year-old Jesperi Kotkaniemi, the youngest player on the team, laughed when one of the patients said she’ll be turning 18 in two weeks!

And in the spirit of Christmas, one young boy in oncology was especially touched by the visit. He recently wrote to Santa Claus asking if he could meet the Canadiens and Youppi!. “I can’t believe it came true,” he says. Year after year, this visit continues to lift people’s spirits and bring the whole hospital together. The Habs organization even surprised staff with complimentary tickets to a game on December 13. “Today was very special,” says Kenny Agostino. “I love kids, so seeing all of these children smiling – even though they’re going through hard times - meant a lot. I’m so glad we did this. ”