Beyond medication: quality of life is the focus for MCH HIV team | Montreal Children's Hospital

Beyond medication: quality of life is the focus for MCH HIV team 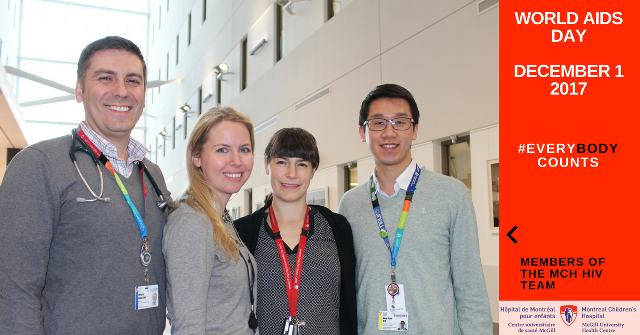 The HIV Clinic at the Montreal Children’s Hospital (MCH) focuses on more than just drug therapies for its patients. “Quality of life is our focus” says Dong Hyun (Danny) Kim, research nurse for the clinic. “The reason why I really enjoy working with the HIV population is because we take care of the patient on a social level too.” Proper care for patients with HIV involves communication between team members and organizations that handle the family’s financial, socio-economic, and in some cases immigration needs. “Eighty percent of our time with the patient is spent discussing their adjustment to everyday life and schooling.”

In the majority of cases seen at the MCH, the child was infected through vertical transmission, meaning they got the virus from their mother during or shortly after birth. “We tell the patients they have HIV when we consider them to be ready to hear the news. We do this while their mom is present because we want the child to see that they can live a relatively normal life like her,” says Danny.

The young patients often want to know if they can get married, have children or even get tattoos. The answer is yes. “There are medications that help prevent the spread of HIV from one person to another. There’s a lot of fear surrounding HIV and AIDS, but the difference between the two is important to note, since not everyone with HIV has AIDS,” explains Danny. One of the goals of treatment is to ensure the HIV does not develop into AIDS, the stage at which the virus takes over the body and wipes out the immune system causing cancers and diseases in the patient.

Dr. Karatzios had a patient who as a young adult was publicly shamed on social media for having HIV. “They say it takes a village to raise a child—we are that micro village. Treating patients with HIV is not only about keeping the virus in check but also building self-worth in the patient so they can overcome the stigma,” he says.