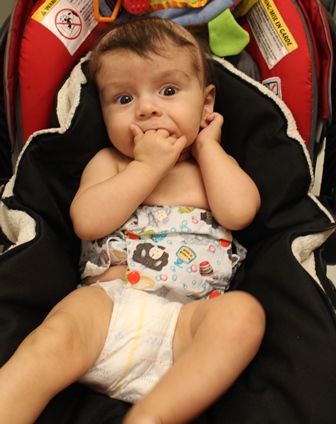 Wednesday, December 19, 2018 - 15:18
A family shares their creative solution to help other patients

While undergoing chemotherapy for a brain tumour at the Montreal Children’s Hospital (MCH), six-month-old Olivier had a gastrostomy tube (G-tube) inserted in his abdomen to facilitate his feeding. As a result of the chemotherapy, Olivier has difficulty eating normally, so the G-tube bypasses his mouth and allows him to receive milk or formula directly to his stomach. G-tubes can become dislodged so Olivier’s mother, Liliane Larocque, looked for a solution to minimize this risk.

Late one night, after hours of searching the internet, Liliane decided to reach out to her aunt Johanne Long for help. A technician in mechanical engineering by profession and owner of THL Costume, a company that creates outfits for dancers and figure skaters, Johanne is someone that Liliane knew she could count on. Johanne learned to sew from her mother and grandmother and years ago, when her nephews were hospitalized, she was faced with a similar challenge of creating clothes adapted to their needs. “Children inspire me, and I am always up to the task,” she says.

She modeled her design on a G-tube belt that is only available in the United States and France, and the morning after her niece’s call, she had a prototype ready. With Olivier as her model, and with feedback from Liliane, Johanne was able to modify the belt as necessary. “We realized that certain aspects of the design were better suited for babies at different stages of their development,” she says. “For example, velcro is better for smaller babies while snaps are more appropriate for bigger babies. We also modified access to the G-tube by changing the opening of the belt from a circle to a U-shape.”

The belt is made of a soft material that is fastened with snaps or velcro around the child’s abdomen, covering the tube. The tube is accessible to parents for feeding through a small opening in the belt that can be opened and closed to keep the tube protected when it is not being used. “The belt is comfortable and keeps Olivier from pulling on the tube,” says Liliane.

Dr. Hussein Wissanji, pediatric surgery fellow at the Children’s, was impressed with Liliane and Johanne’s innovative solution. He along with pediatric surgeon, Dr. Kenneth Shaw, were the ones who inserted Olivier’s G-tubeThe two women delivered 36 belts to Dr. Wissanji’s office for distribution to other patients who will have a G-tube inserted. “This is a heartwarming initiative,” says Dr. Wissanji. “It’s amazing that a family facing such adversity can come up with an ingenious solution and want to so generously help other patients.”

The now aptly named Ceinture Olivier has been modified and designed to fit infants of all sizes and even features a model that is appropriate for bath-time. With the help of a company that has donated the material and a group of volunteers made up of Johanne’s close friends and family who are responsible for different steps of the production process, Johanne has sewn over 100 belts that she will donate to each of the four pediatric hospitals in Quebec.

A dislodged G-tube can lead to discomfort and further hospital visits, so Liliane is happy to have a solution to keep Olivier’s G-tube in place. “If Olivier’s experience can help other families, we are happy to do so,” she says.