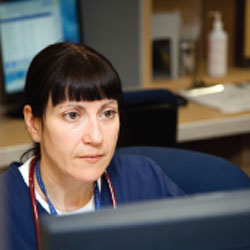 MCH trains army medical personnel
Soldiers from CFB Borden train here before deploying to Afghanistan
They are a little older, have crew cuts and lots of tattoos, but otherwise they look like any other medical resident roaming the halls of The Montreal Children’s Hospital. The big difference is when they finish their rotation they won’t be accepting a job at a clinic or CLSC, they will be deployed to Afghanistan this spring as part of the military’s medical corps. +
Join the MCH Facebook community!
The MCH web site has moved up to Web 2.0 and with it comes our new Facebook page! Join the 100 fans who are already part of the network and receive regular news about site updates, activities and as well as our newsletter. See slide shows, photos from Chris Higgins’ latest visit to the MCH for the launch of the Trauma website and read messages from parents who have sent thanks to the hospital staff. To access the page, enter http://www.hopitalpourenfants.com in the Search function on your Facebook homepage.

Give your doctor a check-up:Website allows patients to rate their physicians
People have some very nice things to say about our MCH doctors. Here are a few of those comments. +

What a month it was for the MCH in the news. In fact, what a “two weeks” it was! From February 6 to 19 alone, there were over 20 stories and interviews in various TV, radio and newspapers. Thank you to the following people for giving their time and expertise.

Dr. Harley Eisman gave two interviews to La Presse on ‘How to use the ER’ and ‘Overcrowding in the ER’. Dr. Eisman also did multiple interviews on the issue of overcrowding and was featured on CIBL Concordia Radio, CJAD Radio, Global TV, RDI TV, and Q92 Radio.

Dr. Éric Fombonne, MCH Director of Psychiatry, was interviewed on the subject of autism for the Téléquébec series Une pilule, une petite granule. The show was aired on February 19 and again on March 5. And on CBC News at Six Montreal, Dr. Shuvo Ghosh, MCH Child Development Program, was interviewed about children with global developmental delays and the long waits to receive various therapies such as speech and language, physiotherapy and occupational therapy.

Meet some of your MCH colleagues. +


The Most and Least Stressful Jobs Today
Where does your job fit in?
When US Airways pilot Chesley “Sully” Sullenberger landed his jet safely in the Hudson River, he proved himself to be a great performer under stress. He also helped illustrate why a commercial airline pilot is ranked as one of the nation's most stressful jobs, according to the 2009 Jobs Rated Report, an in-depth look at 200 jobs by CareerCast.com, a new job search portal. +

Department of Nursing Awards of Excellence 2009
It’s time once again to recognize excellence in nursing at the MCH. As in past years, the Department of Nursing Awards of Excellence awards will be given at each site throughout the MUHC. Categories for nursing excellence include individual nurse, leadership, partner in practice, professional development (group and individual), and the Valerie Shannon MUHC Award for Innovative Leadership, given to a nurse or group of nurses demonstrating innovative leadership in nursing practice.

The nomination period runs from February 23 to March 27, 2009. The winners will be announced at the Awards Ceremony will take place in May. Details on the event will be published in future issues of Chez nous.
Information: Andreane Pharand at 22569.

Celebrating Child Life Week
Child Life Services has been a part of the MCH since 1936 providing education, preparation, support and family-centered care to our patients. Come have fun and celebrate Child Life Week with these special activities, which will be held from
March 23 to March 26.

Monday, March 23
10:00 am to 1:00 pm in the 2B Waiting Area
Minimize Stress and Maximize Coping: Helping Children through their Healthcare Experience
Information booth and button-making activity (coffee will be served)

Thursday, March 26
1:30 to 3:30 pm in the Family Resource Centre (C-542)
Carnival for hospitalized children
MCH staff take on CJAD in hockey fundraiser
Once again, Dr. Blair Whittemore will coach and lead the ragged and aged MCH Mighty MUHC-ers against the CJAD Mighty Yuks at Martin Lapointe Arena in Ville St-Pierre. The MCH Multidisciplinary effort will attempt to keep its unblemished record intact while raising money for the CJAD Kids Fund which generously sponsors the MCH on a regular basis. Dr. Ken Shaw says one reason the CJAD team enjoys the game so much is that “they know we can help if they get hurt.”
Saturday, March 28 at 3:30 pmMartin Lapointe Arena

Pilates for employees - Spring session
A new session of Pilates at the MCH begins the week of March 30. Do something good for yourself and enroll today!

Dr. Puligandla is like the Energizer bunny…despite four different jobs he keeps going, and going and going…
Dr. Pramod Puligandla is a surgeon, pediatric intensive care specialist, Program Director for Pediatric General Surgery, associate professor at McGill, husband, badminton fanatic, and wine geek. Well, not quite a wine geek, but close. During this interview he did wax poetic about the tastiest and most expensive wine he ever tasted, a ‘phenomenal’ 1985 Chateau Margaux. But more about that later. +

Every Sunday from the age of nine to 14 Sara* was sexually abused by her grandfather. “I would always black out what was going on,” she says. “And I would think about something that made me happy, like playing Barbies with my little sister.” +