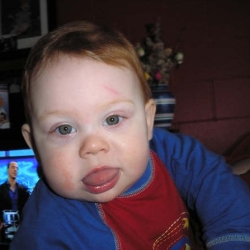 The Montreal Children’s Hospital of the MUHC is the only pediatric centre in Quebec with a multidisciplinary team dedicated to performing surgery on children born with tongues that are too long, too thick or both, a condition known as macroglossia.

Team leader, Dr. Sam Daniel, an otolaryngology surgeon, has extensive experience with tongue reduction surgery having performed over 20 such surgeries to date on infants, children and teens.

This delicate surgery involves cutting away the excessive parts of the tongue muscle in order to restore its shape and function, while taking care not to damage the nerve and artery of the tongue. After the surgery, most children spend a few days recovering in the ICU, occasionally in an induced coma to promote healing. Depending on the complexity of the surgery, most patients are discharged within a few days.

“Many parents in Quebec are under the impression that nothing can be done for their children or that surgery is only possible once children enter adolescence. In desperation, many families have gone to the US to get help, only to find out the surgery cots $25,000,” says Dr. Daniel. “I want parents to know that surgery to correct this problem is available in Quebec at The Montreal Children’s Hospital.”

Dr. Daniel goes on to say that he has performed the tongue surgery on a child who was only two months old. The infant was having trouble breathing and feeding; today he is doing fine. “I find it unfortunate that many adolescents didn’t have the surgery when they were young. By waiting, their large tongues can reshape their jaws and misalign their teeth. They also suffer psychological pain, often from being teased and ridiculed,” he says.

Macroglossia is a relatively uncommon disorder that causes functional and cosmetic problems. A child with the disorder may have symptoms that include: breathing problems, snoring, feeding problems, choking, speech impediment, failure to thrive, and drooling. In some cases, the tongue may protrude from the mouth, which exposes the tongue to trauma. This exposure also leads to mucosal dryness and occasional bleeding.

The MCH’s multidisciplinary team, headed by Dr. Daniel, includes an anesthesiologist, an intensivist and a pain management specialist.

In rare cases, a congenital birth defect is the cause of macroglossia is. In many cases, macroglossia may be caused by a primary disorder that may be either congenital (e.g., Down syndrome or Beckwith-Wiedemann syndrome) or acquired (e.g., as a result of trauma or malignancy or deposits of tissue in the tongue).

The Montreal Children’s Hospital is the pediatric teaching hospital of the McGill University Health Centre. This institution is a leader in the care and treatment of sick infants, children, and adolescents from across Quebec. The Montreal Children’s Hospital provides a high level and broad scope of health care services, and provides ultra specialized care in many fields including: cardiology and cardiac surgery; neurology and neurosurgery, traumatology; genetic research; psychiatry and child development and musculoskeletal conditions, including orthopedics and rheumatology. Fully bilingual and multicultural, the institution respectfully serves an increasingly diverse community in more than 50 languages.