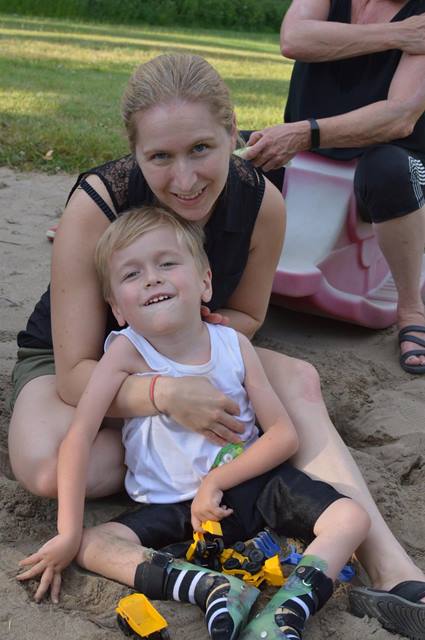 Émile was a little over one year old when he was diagnosed with a rare genetic disease. Spinal muscular atrophy, commonly referred to as SMA, is a condition that affects the motor nerve cells in the spinal cord, severely limiting an individual’s ability to walk, eat, and breathe. Émile’s mom, Amy, was devastated by the news but it didn’t take long for her to seek information and support. “I was really happy to find out about a group called Cure SMA Canada, and through their organization, I went to a conference in California for professionals and families living with SMA,” she says. “I learned so much while I was there and met some amazing people, and it all made me think, ‘Why not start a group in Québec?’” And so she did.

Amy approached SMA Canada with her idea, and shortly after, Cure SMA Québec was launched. Within a few days, 80 people had joined. They now have over 500 members representing about 100 families living with SMA. “People were really excited to get this going. Our first meeting was in someone’s apartment, and then it took off from there,” she says.

Amy points out that the group members support each other in many different ways. “We organize regular outings such as picnics or dinners, and events around SMA Awareness Month in August, and we’ve even organized dinners at the Children’s for those of us whose kids are followed here,” she says. The group’s Facebook page also provides a way for members to organize events, share information and ask questions on new treatments and clinical trial news, and even help each other out in an emergency. Amy recalls one time when she borrowed a breathing machine from another family nearby when Émile’s machine malfunctioned. “The opportunity to get out and meet new people is really important,” she says. “Plus, social media networks are really important for groups like ours, and in some cases, our group is helping to break the isolation for families who live with the disease.”

From the National Assembly to summer camp

From her first days as the de facto leader of the group, Amy is now co-president of Cure SMA Québec’s board along with Isabelle Boudreault, whose child is also followed in Complex Care at the Children’s. One of their key accomplishments last year was being invited by Amy’s MNA Dave Turcotte to present a petition to the National Assembly in Québec regarding reimbursement for a new drug which has promising results in treating SMA. They received a standing ovation after their presentation. Amy believes it was real proof of how the parents are pushing things forward and advocating for their children.

Last summer, Amy and several others organized a four-day trip to a summer camp near Montreal. “There were around 20 families who took part with some staying overnight and others making day trips,” says Amy. She explains that in the day-to-day lives of families living with SMA, the siblings are often left out of the equation, but at summer camp, they’re meeting other children just like them, and they’re included in all the activities. “I think they really understand each other and they start to form friendships too,” says Amy. “It’s fun for them to share with other brothers and sisters who are living the same thing.”

Amy is already planning the next outing which will be a trip to either Valcartier or Jay Peak waterpark. So how do Amy and the other parents keep things going? “Well, we’re all busy parents and we’re all volunteers on this,” she says. “But what it gives us in return is really worth all the work we do.”

Find out more about Cure SMA Québec on the group’s Facebook page. 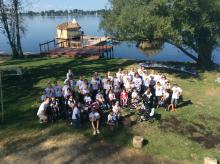