A Day in the Life of… the Neonatal Transport Team 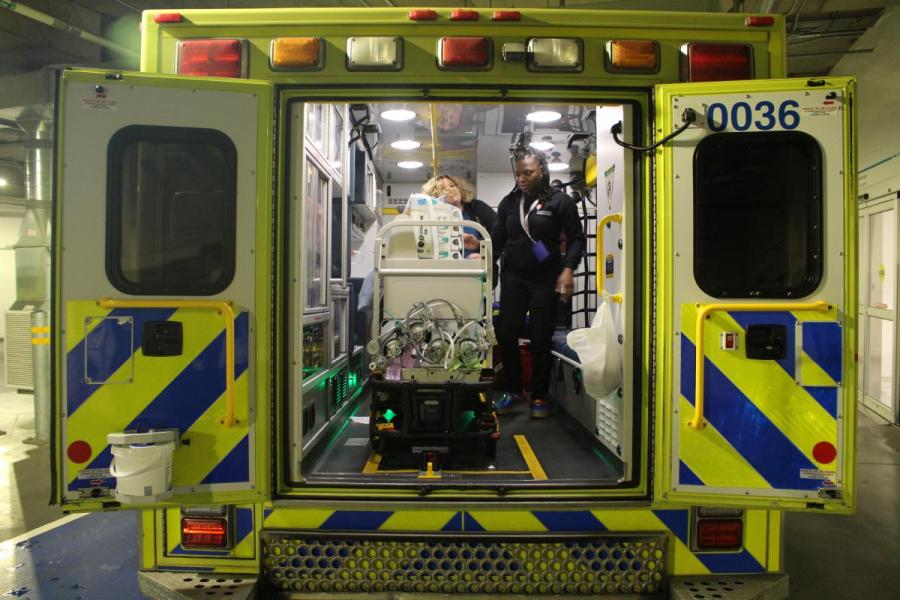 The Children’s Neonatal Intensive Care Unit (NICU) is steps away from the Birthing Centre at the Royal Victoria Hospital, and babies born there don’t have far to go when they are admitted to the NICU. But infants born at other birthing centres across Montreal and elsewhere who are transferred to the Children’s NICU have a longer journey ahead of them. Thanks to the nurses and respiratory therapists who are a part of the Neonatal Transport Team, the first trip of their lives is as safe and secure as possible.

Shelley McClintock, Nurse, and Natasha (Tasha) Daniel, Respiratory Therapist, are just two of the more than two dozen members of the Children’s Neonatal Transport Team. The requirements to work on the team are exacting. “Before even enrolling in the program, a nurse needs three years’ experience in a level 3 NICU such as the Children’s,” says Shelley, “which must include intubated patients, and working with extreme preemies and infants with cardiac malformations. Then you wait until the transport training course opens up to new candidates. The courses aren’t offered regularly so you have to hope for the right timing, and hope that you’re a good fit for the job.” Once accepted, nurses take an intensive course before spending between three to six months paired with an experienced transport nurse.

Respiratory therapists meet similar requirements to qualify for the transport team but with certain variables specific to their profession. “Before applying to the Transport Team, an RT must have two years of NICU exposure—also at a level 3,” says Tasha, “and must be proficient at performing intubations on term infants and preemies.” The team is led by Dr. François Olivier, Medical Director, Sophie Fournier, Nurse, and Helen Seremetis, RT.

Members of the Transport Team are available on a 24/7 basis, and they respond to calls from referring birthing centres multiple times a day. During their shifts, team members carry out various duties on the unit, such as maintenance of central lines and assisting in emergency situations, but they don’t have specific patient assignments in case they have to leave at a moment’s notice. For every call, the nurse and respiratory therapist go out together.

In the NICU, there is a dedicated telephone line for referring centres. The Transport neonatologist on duty takes the call, and then reviews the case with the nurse and RT who will head out. Urgence Santé is notified to make an ambulance available for the transport. “When in the ambulance, we review and firm up our plan for the moment we arrive at the referring hospital,” says Shelley. “When we get there, things might have changed—for better or worse—so we also have to be ready to re-evaluate quickly.”

Sometimes when they arrive, they immediately assess the ABCs—airway, breathing, circulation— and stabilize the patient before even receiving the report or talking to staff from the referring centre. Tasha adds, “We are the eyes and ears for the rest of the NICU team waiting back at the Children’s so it’s essential to assess the situation immediately and methodically, carry out the required care, and then call the neonatologist with an update.” 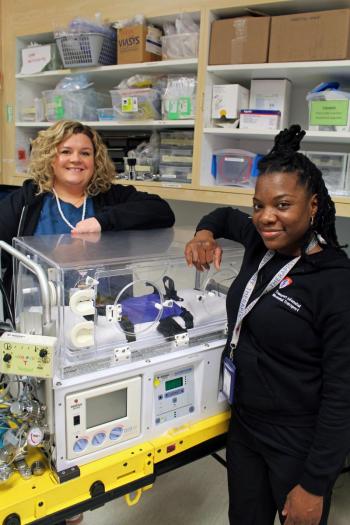 The equipment and medication the pair bring with them cover a whole range of needs for a newborn in crisis. But Shelley and Tasha point out their main goal as a transport team is always to stabilize and transport the infant as quickly as possible. The team works by a motto, of sorts: Don’t bring the ICU to the baby—bring the baby to the ICU. “Research has shown that there are better outcomes the faster you get the baby back to the NICU, so that’s always in the background,” says Tasha.

Shelley and Tasha agree that communication—both verbal and non-verbal—is essential to their work. “Over time, some of us [nurse and RT] get to know each other really well depending on how often we’ve worked together in the unit and on transport,” says Tasha.

Never lose sight of the family

Despite the focus required to do their work, Shelley and Tasha are always aware that they’re taking care of not only a newborn but the parents as well. “It can be hard to take a child away from their parents, especially when everything is moving so quickly and there are many unknowns,” says Shelley. “We meet parents when we go to the referring centres and pick up their newborn, we explain as best we can what is happening in the moment, and whenever we can, we greet them when they arrive at our NICU so that we make the connection again, and help them get settled.”

They also deal with any number of staff they meet at the referring centres. “There are times when they’ll want to learn from what we’re doing, so we try to include them if it’s feasible, taking advantage of teaching moments,” says Tasha.

A challenge, but worth it

Shelley and Tasha have similar answers to the question of why they decided to be part of the neonatal transport team. “It’s definitely a challenge because you never know what to expect,” says Tasha, “but that’s also the draw.” They acknowledge that their work can sometimes be very stressful, but being able to stabilize a critically ill infant and ensure their safe transfer to the Children’s NICU is very rewarding. “Honestly, our entire team does an excellent job,” says Shelley. “And we love the work that we do!” echoes Tasha.