A day in the life of…a critical care social worker 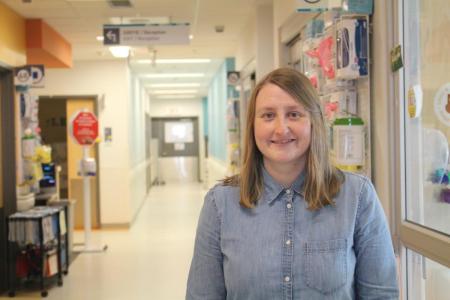 The arrival of a new baby is supposed to be the happiest time in a family’s life. But for parents of babies born extremely premature or sick, the excitement of that moment is often overshadowed by a sudden and unexpected admission to the Neonatal Intensive Care Unit (NICU).

“In that moment, everything stops for the family,” explains Angela Heguy-Johnston, one of 3 social workers covering the unit and dedicated to providing essential psycho-social support to a baby’s parents, who find themselves in a life-altering situation with little preparation. “It’s my role to give these families power when they feel powerless.”

Angela’s day typically begins by dividing the patient roster with the other social workers on the unit and introducing herself to parents for the first time.   Unlike her critical care colleagues who put all their energy into treating and caring for a sick and fragile neonate, Angela’s role is uniquely focused on accompanying parents and arming them with the tools they need to stay afloat, both emotionally and functionally. “This couple didn’t know they would end up here and don’t know where this journey will take them,” she explains. “They envisioned having a baby shower, preparing their baby room, and yet they find themselves here. It’s a very big deal.”

In her initial meetings with families, Angela tries to focus on procedural steps that can ease the financial burden a family can experience due to a prolonged hospitalization after a child’s birth. Some of these benefits can include employment insurance, parental leave or other governmental programs for which they might qualify. Parking passes, meal tickets, and gift cards or vouchers are given to families requiring additional instrumental support. “Some of these benefits can seem small,” says Angela, but every bit of assistance is appreciated when a family is in need.

Over the days and weeks that follow, Angela says a family’s needs naturally change from procedural to emotional due to the sometimes difficult news they’ve been given about their child’s health or prognosis. “As I get to know a family, my role shifts to provide a safe space for them to express their feelings and to make suggestions that can help a parent better cope with their experience,” she explains. It’s not uncommon for a parent to experience feelings of stress, isolation and grief that can remain, even when their child is doing much better. “Sometimes this takes the form of referring them to their family doctor if we notice signs that things aren’t going well,” she explains. “At other times, we’ll refer a parent to the psychologist on our team.” The goal is always to try and help a parent make sense of what has just happened and feel that their needs are addressed, along with their child’s. 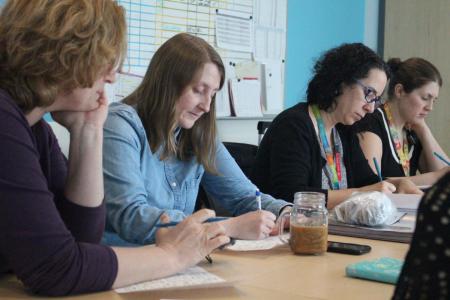 Preparing for life outside the hospital

It’s a bittersweet moment when a family who has spent such a long time in hospital prepares for a long-awaited transition home, says Angela. “These parents spend weeks or months on the unit and it becomes a part of their life,” she explains. “Therefore going home can sometimes feel like a different kind of loss.”

Angela says she remains very cognizant of the fact that parents of NICU babies are not going home like they would in the context of a regular birth, and that they will continue to need psycho-social support as they adapt to a life outside the hospital. “My relationship with a family doesn’t end upon discharge,” she says. “I do follow-ups by phone to ensure that their needs are being met outside of the hospital, either by transferring a file to a social worker at the CLSC or to a colleague if they will continue to be followed as outpatients.”

One of the most validating experiences is when families who have been discharged return to the hospital for a follow-up and decide to pay her a visit several months or even years later. “To see a family with a now 2 or 3-year old, and see how far they’ve all come…is a really great day.”

Destined to be part of the Children’s family

Fulfilling the role of a social worker at the Children’s is a journey you could say Angela has been preparing for her entire life. Upon graduating from McGill’s Social Work program, she began working at the Children’s in June 2015. Having grown up with two parents who built long careers at the Children’s, as well as two brothers whose career paths have also intersected with the institution, Angela always knew she wanted to be part of the MCH family in some way. Having completed a DEC in Recreation Studies earlier in her academic journey, Angela says an internship in the Psychiatry Unit many years ago made her shift her career goals. “I realized social work was more the direction I wanted to go, and luckily it wasn’t too late.”