A day in the life of … two medical technologists! | Montreal Children's Hospital

A day in the life of … two medical technologists! 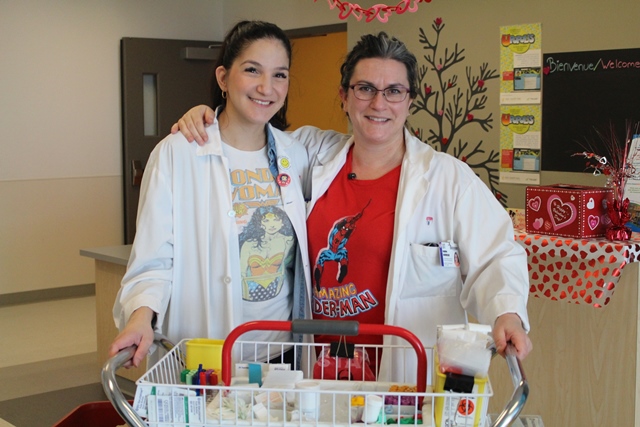 Nadine Boudreau and Dimitra Sklavenitis make a great team. They’ve only been working together for less than a year, but it feels like decades.  They make each other laugh. They make their patients laugh. Sometimes they even coordinate their outfits. “Today we decided to go with a superhero theme,” laughs Dimitra. “The patients love it, and so do their parents!”

Nadine and Dimitra are medical technologists, but hospital staff often refer to them as blood technicians. They spend their mornings drawing blood on the wards, and finish their days in the Test Centre on B2. There are six medical technologists who rotate on the inpatient units and four who are stationed in the Test Centre. On the wards, they are solely responsible for drawing blood, also known as procurement. In the Test Centre, while they do continue to draw blood for outpatients, they also collect urine or stool specimens, perform throat and nasal swabs, and carry out sweat tests.

In pediatrics, medical technologists work in pairs. “If a child is under seven-years-old we definitely go in together,” explains Nadine. “One of us has to hold down the patient’s arm and sometimes the parents even have to get involved.” On an average day, they will see 18 to 24 inpatients before 10 a.m. “We receive the requests from the physicians the night before or sometimes the morning of,” says Dimitra. “We start drawing blood around 6:30 a.m. because the doctors would like the results before seeing the patients.”

Depending on the test, they will be asked to draw a specific amount of blood. “It’s amazing how much information can be gathered from a tiny test tube of blood,” she says. Most of the tests being conducted are either routine, or prescribed in order to rule out certain diseases, genetic conditions, or for research purposes.

How to collect blood

Medical technologists can perform two types of procurement: capillary puncture or venipuncture. Capillary blood collection is simple, relatively painless and is often prescribed when a small amount of blood is needed in newborns or younger children. It’s performed by poking a child’s finger or heel. However, it’s not ideal for every test, because it can lead to hemolysis in difficult cases. Hemolysis is defined as the rupture of red blood cells and can affect certain test values. “We put a lot of pressure on the finger or heel in order to force the blood out, so hemolysis can happen if the patient doesn’t bleed well,” explains Dimitra. “This can lead to inaccurate results for certain diagnostic tests.”

A venipuncture is when blood is drawn directly from the vein. Nadine says it’s not easy finding a vein in a child who is stressed, dehydrated or tired. “It’s like the veins hide in these situations,” she says. “Luckily, we’re good at what we do and we usually find the vein in the first shot, but we’ve had some tough cases where we’ve been with a patient for over an hour. The longer this process drags on, the less likely we are to succeed at it.”

After each ward, the blood samples are placed in the pneumatic tube and sent directly to the Central Lab in the Research Institute. “For rare blood tests that are unavailable within the MUHC or Quebec, we are able to send the samples across Canada,” she says. “And sometimes even outside of Canada if necessary.”

Besides procurement, medical technologists also perform sweat tests on Thursdays to rule out cystic fibrosis. A small amount of gel made up of an odorless chemical, called pilocarpine, is applied to the child’s arm. Once the gel is applied, two electrodes are strapped to the arm and held down for five to seven minutes. “Pilocarpine in conjunction with the electrical stimulation helps the sweat glands to produce sweat,” explains Nadine.

A plastic coil, or as Dimitra likes to call it, “a superhero watch” is then strapped to the arm and wrapped in plastic wrap and warm clothing. “We then tell the patient to go out and be active for 30 minutes. The goal is to collect as much sweat as possible,” says Nadine. The sweat is then tested by the medical technologists in the Test Centre. They measure the amount of chloride in the sweat by placing the collected sweat in a Chloridometer. Normally, sweat contains very little of this substance, but a child with cystic fibrosis will have two to five times the normal amount of chloride in their sweat.

Nadine and Dimitra love their jobs, especially when they get a high-five from a patient after a venipuncture. “We have a different approach in pediatrics. We take our time with each patient because we want to make an unpleasant situation somewhat pleasant,” says Dimitra. “Our contact with patients is limited, but it’s invasive for the child. That’s why we wear superhero t-shirts and try to make patients laugh. We want to seem less aggressive, less scary.”

“Singing to patients helps too,” laughs Nadine. “And we sing a lot!”