Dr. Puligandla is like the Energizer bunny…despite four different jobs he keeps going, and going and going… | Montreal Children's Hospital

Dr. Puligandla is like the Energizer bunny…despite four different jobs he keeps going, and going and going… 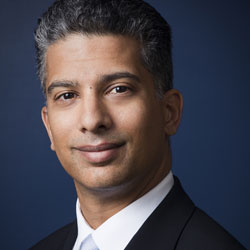 Friday, March 6, 2009 - 14:46
Dr. Pramod Puligandla is a surgeon, pediatric intensive care specialist, Program Director for Pediatric General Surgery, associate professor at McGill, husband, badminton fanatic, and wine geek. Well, not quite a wine geek, but close. During this interview he did wax poetic about the tastiest and most expensive wine he ever tasted, a ‘phenomenal’ 1985 Chateau Margaux. But more about that later.

The Montreal Children’s Hospital accepts one new pediatric surgery fellow per year; it takes two years to complete a fellowship. Snagging a pediatric surgery fellowship isn’t easy. You have to really want the job. “The bar is set high to become a pediatric surgeon. There are a lot of expectations and it is very competitive,” says Dr. Puligandla. “Anyone who applies for one of the only seven fellowships available in Canada (and a total of only 41 positions across North America) each year is a real go-getter. A type-A personality.”

Dr. Puligandla should know: he landed one of those coveted MCH fellowships back in 2001. When he completed the fellowship in 2003, he was offered a permanent job at the MCH. “It is really flattering to be asked to stay on after a fellowship. It means those who trained me were sufficiently impressed with my skills to ask me to join their team.”

Dr. Puligandla didn’t always dream of picking up a scalpel. Originally he wanted to be a pediatrician. But when he was doing a surgery elective as a 2nd year medical student he fell in love with it and decided then and there to combine his love of pediatrics with his love of surgery.

It requires a great deal of knowledge to be a pediatric general surgeon. They operate on all types of cases: trauma victims with abdominal injuries, patients with cancer, patients with head and neck injuries, patients needing lung surgery. “You are operating on every part of the body so you have to maintain your skills. In addition, your patients vary in age from newborns to 17-year-olds. This is what makes pediatric general surgery appealing to me. You just never stop learning.”

Another part of the challenge is that much of what pediatric general surgeons do is urgent, or semi-urgent. The MCH’s four general surgeons perform approximately 1500 surgeries a year. While on call they might have to come in to hospital in the middle of the night or the middle of Sunday dinner. Dr. Puligandla admits it can have an impact on family life. But his wife understands that he is pursuing his passion. And his kids can still pick him out of a line-up.

To maintain his stamina and concentration Dr. Puligandla also has a few passions outside of the OR and PICU. He plays badminton two to three times a week to stay fit and to de-stress. He is also into wine tasting. Ah, yes, the wine geek issue.

While he maintains he is not a wine geek, Dr. Puligandla does admit to owning a wine cellar and to hanging out with a few wine fanatics. Every month or so, he gets together with a few close friends who truly appreciate the beverage to share a good bottle of wine. The most precious bottle in his cellar is a 1997 California Cabernet that he bought the year he got married. The wine is still aging and so he is saving it for a special occasion, maybe his 15th wedding anniversary. Dr. Puligandla says it is uncanny how your sense of taste and smell evolve allowing you to appreciate the subtle differences between one bottle of wine and the next.

Another thing Dr. Puligandla really appreciates is the trust families put in his abilities. He says what sets a good pediatric surgeon apart from a mediocre pediatric surgeon is the surgeon’s ability to connect with the child and the child’s family. “Many people love performing the surgery, but not necessarily dealing with the families. As a pediatric surgeon, I am cognizant of the fact that parents are putting their child, their most precious possession on earth, into my care. This is a very humbling thing.”