A family affair: parental presence at induction helps ease stress for both generations 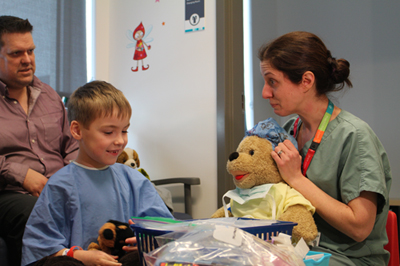 Six-year-old Matis was born with esophageal atresia. He had his first surgery only six hours after he was born, and since then, has undergone more than 10 procedures. His parents Mélanie and Stéphane say the surgeries Matis had as a baby didn’t take a big toll on him but as he got older, his awareness of what would take place caused a great deal of anxiety not only for him but for his mom and dad too. A special program at the Montreal Children’s Hospital (MCH) however, has made a world of difference to the family. Unique in Quebec, the Children’s Parental Presence at Induction (PPI) program is led by Child Life Specialist Sabrina Drudi who works in collaboration with the Anesthesia department, to help ease the stress that comes with surgery for the patients and families involved. 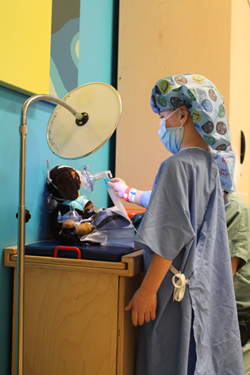 Sabrina has worked at the Children’s for 10 years, and since 2011, has been developing the PPI program in partnership with the OR staff. In her first year, she saw several dozen patients. Today, thanks to support from the MCH Foundation and one of their generous donors, Sabrina sees approximately 600 patients and their families every year. The day of Matis’s surgery was the third time Sabrina prepared him and his family for surgery. Sabrina tailors each session according to the patient’s age, stage of development, level of anxiety, and previous hospital experience. Since the program involves one of the child’s parents accompanying them into the operating room, Sabrina also works closely with the parents to answer their questions and help prepare them for what to expect. She uses everything from guided imagery to music and games to help children and teens have a more positive experience.

Sabrina’s session with Matis and his parents lasted about 45 minutes. In a typical day, Sabrina sees five to seven patients in the Surgical Day Centre. She uses medical play to prepare the child for surgery. “The child doesn’t have a choice about surgery but we give them other choices,” says Sabrina. “Together, we decide what scent will be added to their mask, the comforting item that will accompany them into the OR, as well as the comforting strategy they will use while falling asleep. With Matis, we created a story about going deep sea diving. We even played with an anesthesia mask to help him be as calm as possible when having anesthesia.”

Peace of mind for parents

Mélanie and Stéphane are very happy the PPI program exists. “Being able to go into the OR with him and stay there while he falls asleep gives us a lot of comfort,” says Mélanie. “And telling him that we’ll be there when he wakes up reassures him too.” Mélanie acknowledges that it’s not always easy to see your child receive an anesthetic but being with them until they’re asleep actually helps reduce the stress of waiting for the procedure to be done. “It’s a really great program, and we’ve seen how it helps him and us both physically and psychologically.” 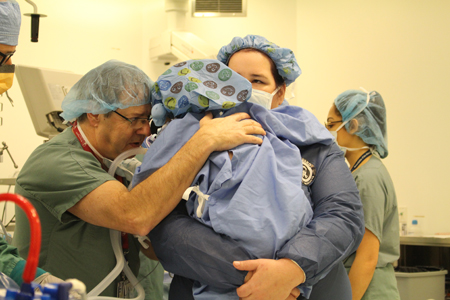 Matis has had problems with recurrent pneumonia as a result of his atresia. His most recent procedure at the Children’s was done to see if the problems he was experiencing were getting better.

Dr. Dominique Lévesque, Matis’s gastroenterologist, says the PPI program has helped their work tremendously. “The operation was a success and Mélanie accompanying Matis into the OR helped things go smoothly,” she says. There will be more procedures in Matis’s future, but he’s less anxious than he used to be and as a result, Mélanie and Stéphane are less anxious too. “I think we’re often more stressed than he is but to see him go into the OR with a smile on his face really helps,” says Stéphane. “It’s such a positive change for all of us.”