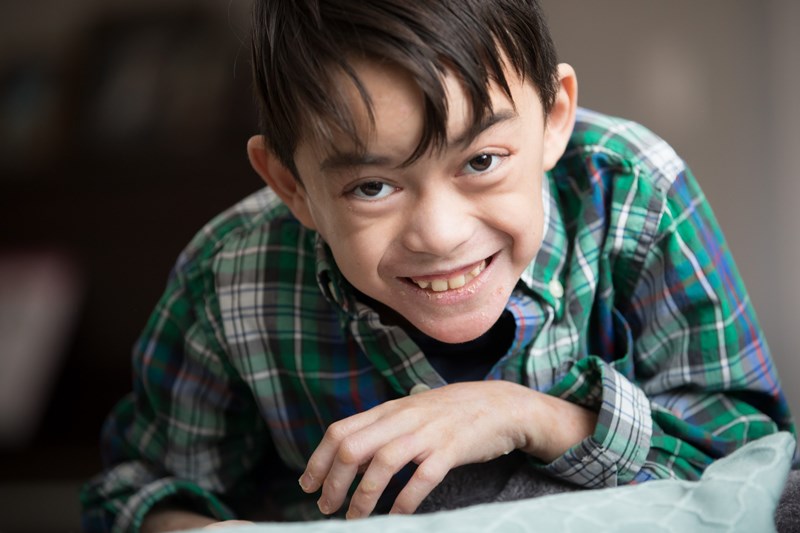 Last April, eight-year-old Evan Prescott trained for months with friends before running two 50 metre races in the Défi Sportif Altergo, a Quebec sporting event for children with special needs. Not only did he cross the finish line first, but he achieved a major milestone – he ran.

A rare and shocking condition

Evan was born with epidermolysis bullosa, a rare genetic condition that causes the skin to blister easily. “We knew something was wrong at birth, because he was missing skin on his palms and heels,” says his mother, Yandy Macabuag. Evan was immediately transferred to the Neonatal Intensive Care Unit (NICU) at the Montreal Children’s Hospital (MCH). Overnight, he started to develop blisters all over his body; some were even as large as his hand.

One of the residents had treated a patient with similar symptoms during her training in Ireland, and Evan was diagnosed with a milder, yet severe version of the condition, called generalized severe simplex. But it wasn’t hereditary. “There was no genetic link to my husband and me,” says Yandy. “In Evan’s case, he was missing a protein called keratin 14.”

Epidermolysis bullosa can be fatal, especially during the first year of life, because of infection and failure to thrive. At one month old, Evan had a gastrostomy tube inserted to help with feeding because he wasn’t latching properly. He would break out in blisters around his lips because of the friction from breastfeeding. “Evan has to eat even more calories than a normal child because his body is constantly healing,” explains Yandy.

His body was also covered in open wounds and his parents had to keep him bandaged from head to toe. “Learning how to meet all of his needs was extremely challenging,” recalls Yandy. “Every child with this condition responds differently to it.” At six months old, Yandy and her husband Marc decided to stop bandaging Evan because his body didn’t respond well to humidity and it was leading to even more blisters.

Learning to live with the daily routine

On any given day, Evan has a minimum of ten blisters on his body, some smaller than others, but painful nonetheless. His hands and feet are prone to more blisters, because they are the most sensitive parts of his body. “At home, Evan moves around on his knees 75 percent of the time, because it’s too painful to walk,” explains Yandy. “For some reason, he doesn’t blister on his knees and elbows. Those areas have developed callouses instead.”

At school, Evan uses a wheelchair most of the time. He also writes with an iPad or uses a scribe, a teacher's assistant who writes for him. “But he’s a stubborn eight year old so he wants to do everything himself,” laughs his mom. He also prefers winter weather, because his skin is drier and blisters less, but the friction caused from wearing so many layers of winter clothes doesn’t help his condition. “The fall going into winter is definitely the best period of time for him,” says Yandy.

Skin care is also a critical part of Evan’s everyday life. His parents clean, lance, and drain his blisters twice a day. If they notice an infection, Evan takes a bleach bath and rubs the open wound with antibiotic cream. He also takes a salt bath every second day to prevent infection by drying out the skin. “This is all part of our daily routine.”

Finding a way to relieve the pain

Dr. Ingelmo then decided to think outside the box. “In our clinic we cannot give up,” he says. He sat down with Evan’s father, Marc, and asked him what his ideal pain management solution would be. “Marc was super clear. He said he needed Evan not to cry when they lanced his blisters, he wanted something that would wear off quickly because he had to drop Evan off at school right after skin care and he also wanted something with no serious adverse effects,” explains Dr. Ingelmo.

He concluded that the only treatment option available was nitrous oxide, more commonly known as ‘laughing gas.’ “In Italy, where I used to work, they use nitrous oxide inside and outside the OR on a daily basis for pediatric and adult patients,” he says. “But it’s not common practice here.” Not only is it uncommon in North America, but nobody had ever suggested using the treatment at home. “Evan is the first child in the world to use nitrous oxide at home to help relieve the pain associated with his condition,” says Dr. Ingelmo.

His parents were instantly on board with the idea, but Evan had to be convinced. He was scared of the mask used to breathe in the gas. “It took him four months to come around, but eventually he did,” recalls Dr. Ingelmo. “Our team then jumped into action and they trained Evan’s parents on how to use the device at home.” The gas is stored in a small tank that houses a mix of 50 percent oxygen and 50 percent nitrous oxide and it limits the amount of gas Evan can inhale. “Evan uses it every time we do skin care. It relaxes him and relieves the pain,” says Yandy. “It works within seconds.”

Change for the better

Yandy and Marc have noticed big changes in their son since he started using nitrous oxide. “He wants to try everything and he’s less fearful of things because he knows that there’s some comfort and relief at the end of the day if he needs it,” says Yandy. Even with everything he goes through on a daily basis, Evan is still a smiling, energetic, happy-go-lucky kid, who just wants to be a kid. “Evan will have this condition for life. At the end of the day, everything causes a blister, so we can’t stop him from pushing himself and trying new things. This is his life and we allow him to make choices. We don’t put any limits on him.”

The Chronic Pain Management program is generously funded by an anonymous donor.