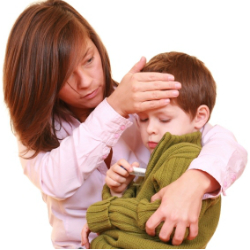 MONTREAL, Nov. 22, 2012 /CNW Telbec/ - Having the flu is no fun, no matter how old you are. Fever, aches and pains, stuffy nose, sore throat, coughing and sneezing…most of us are all too familiar with these signs and symptoms, especially at this time of year. Experts at The Montreal Children's Hospital (MCH) are reminding the public that the best way to avoid viral infections like the flu is to get children and vulnerable family members vaccinatedbefore flu season kicks into high gear, which happens to be right around the holidays.

"Preventive measures such as vaccination and proper respiratory etiquette are two of the most effective ways to help decrease unexpected ER visits and resulting lengthy wait times during the busiest time of the year," says Dr. Harley Eisman, Director of The Montreal Children's Hospital Emergency Department. "Getting the flu shot early on in the season is also recommended to adequately protect your child from developing a serious infection."

Every winter as many as one in four Canadians catch the flu. At the Montreal Children's Hospital, between October and February 2011, 27% of admitted patients came to the ER because of respiratory illnesses like the flu and common cold. Many of these patients end up spending more time in waiting rooms, and less time in bed, which is often the best remedy for the flu.

When to bring your child to the ER

A serious concern for parents during flu season is when to home-treat a child with flu symptoms, and when to see a doctor.

Dr. Eisman says a visit to the doctor is highly recommended if:

Typical flu symptoms such as mild to moderate fever, sore throat, muscle aches and pains, as well as coughing and sneezing can often be treated at home with plenty of fluids, lots of rest and some chicken soup. However, if you think your child should see a doctor, some good alternatives to emergency care are CLSCs and local clinics. They offer walk-in services for seasonal flu.

It's also important to remember that fever is a normal response when the body is fighting a virus, and parents can use over the counter fever reducers, such as acetaminophen to keep their kids comfortable.

Getting the flu vaccine

In order to decrease the risk of flu-related health complications and reduce the impact of the flu, the MCH strongly encourages parents to get their children vaccinated. Flu shots are administered at your local CLSC or doctor's office from the beginning of November. In Quebec, the seasonal flu shot is available free of charge for children and adults who are at increased risk of more severe infections and complications. These groups include infants between the ages of six to 23 months old, the elderly, pregnant women, and individuals with chronic medical conditions.

If your child has a fear of needles, a new vaccine called Flumist®, administered by a nasal spray, is another available option. This vaccine is available from your local health practitioner or pharmacy, but is not subsidized by the government unless your child suffers from particular chronic conditions.