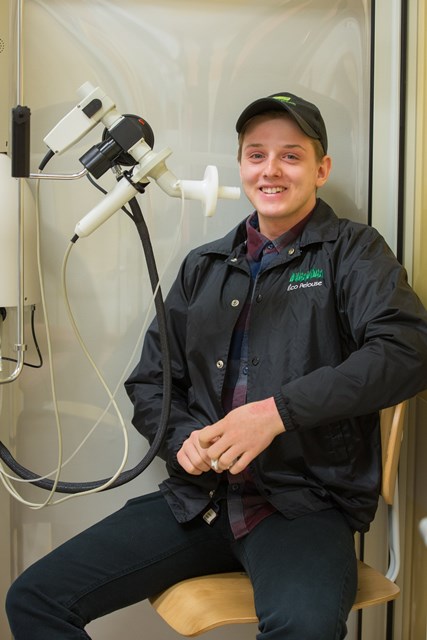 “Because I was diagnosed with cystic fibrosis at 10 years old, I don’t think of myself as a sick kid, because I lived the first 10 years of my life as a normal one.”

Every morning, 17-year-old Alek Leboeuf wakes up, does his exercises, eats a large breakfast and starts his day. But as a baby, his reality was very different. “Alek was sick all the time. He was constantly in and out of the hospital for infections, bronchitis, and pneumonia,” recalls his mother, Melanie Guérin. After suffering from a near-fatal infection, he was transferred to the Montreal Children’s Hospital where a team of specialists followed him very closely, but nobody could figure out what was ailing the young boy.

In 2011, his doctors made a huge breakthrough. Alek was diagnosed with a rare, variant form of cystic fibrosis (CF). “We test for this disease through sweat tests and genetic testing, but Alek’s results never fit within our criteria,” says Dr. Larry Lands, director of Pediatric Respiratory Medicine and the Cystic Fibrosis clinic at the Children’s. On average, children who suffer from cystic fibrosis have five times the amount of salt in their sweat; Alek has two-and-a-half times the amount of salt. “These variant forms tend to be a lot milder, and often present later in adolescence,” says Dr. Lands.

Cystic fibrosis is a multi-system genetic disorder that affects the digestive system and lungs. The disease affects the body’s exocrine glands and leads to the overproduction of an abnormally thick mucus. Patients suffer from respiratory infections because the mucus blocks the body’s pancreatic ducts, intestines and bronchi. Without proper treatment and exercise, these ongoing lung infections can lead to the destruction of the lungs and loss of lung function.

Specialists recommend certain airway clearance techniques to help CF patients loosen and cough out the thick, sticky mucus from their lungs. Clearing the lungs not only helps decrease lung infections, but can also improve lung function over time. One of these techniques is called percussion, but it is more commonly referred to as “clapping.” Twice a day, Mélanie had to clap on Alek’s chest, back and stomach to help loosen the mucus. “We did this technique when he was younger and it took us about 20 minutes to complete,” says his mother.

Currently, Alek is using a positive expiratory pressure (PEP) machine to help break up his mucus. Every morning he breathes into a handheld mouthpiece that allows him to breathe in easily, but makes it difficult to breathe out. Breathing against the resistance helps push the air behind the mucus and away from the lungs and airway walls. “I prefer this technique because I get to do it completely on my own,” says Alek.

Regular physical activity and good nutrition are also ways that patients can better manage their CF. “Because mucus builds up along the patient’s intestinal walls, it becomes difficult for the pancreas to break down food properly, which is why our patients have such a hard time gaining weight,” explains Dr. Lands. CF patients are also at a high risk of malnutrition, because their bodies don’t absorb food properly. Normally, people absorb 95 per cent of the fat they eat, whereas CF patients absorb closer to 50 per cent.

After learning about the benefits of exercise, Alek thought of the perfect way to stay in shape. At 13, he decided to start mowing lawns for his neighbours during the summer months. “I started a little side business called ‘Éco-Pelouse’ in my hometown of Saint-Sabine,” he says. “I wanted to be eco-friendly, because of my cystic fibrosis, so I used a battery-run lawnmower.” By the following summer, his confidence had grown and he started printing business cards. Then last year, he borrowed some money from his grandmother and bought himself a brand new tractor. “I went from five to 15 customers in one summer, and my neighbour is showing me how to do snow removal too,” says Alek. “I’ve already managed to pay back my grandmother most of the money.”

He is so devoted to his company that he even created a company logo, and has printed promotional material including magnets, hats and pens. “I also put decals on my tractors and pickup truck,” he laughs. He is now planning on pursuing a career in landscaping and agriculture. “I also have ADHD so running my own company has helped me focus. It has given me a goal. It also helps that I have so many ideas running through my head and a ton of energy to burn!” he says. “I love working with my hands and I definitely want to do this as my career.”

Alek has also started training with a personal trainer, and the combination of both lawn mowing and bodybuilding has improved his lung function tremendously. He has even managed to gain weight by consuming 6,000 calories a day. “Alek can handle eating that much, because he burns so many calories with everything he does,” says Dr. Lands. Even a recent surgery on his spine didn’t stop him. “Alek also suffers from double scoliosis and underwent a big surgery last November to straighten his back,” says his mother. “Plus he was back in the operating room a week later with appendicitis. That’s my Alek! There’s never a dull moment. He is the most determined kid I have ever known and he doesn’t let anything stop him.”

Alek’s determination to stay healthy has not only been noticed by his family. His entire healthcare team often refer to him as an inspiration. “Alek’s resilience is remarkable. He has overcome so many medical challenges and continues to go out of his way to keep himself healthy,” says Dr. Lands. “He doesn’t believe in turning himself into a victim and that is very inspiring to see.”