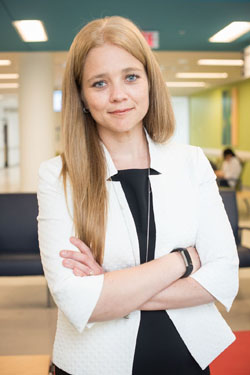 Montreal, February 25, 2019—Mathilde came into the world with chubby cheeks and a full head of auburn hair. But she was a very sick baby, and was immediately transferred on January 19, 2013 to the Neonatal Intensive Care Unit at the Montreal Children’s Hospital of the McGill University Health Centre (MCH-MUHC). By the time she arrived, she was sicker than initially expected; Mathilde’s small head was of particular concern to doctors. She underwent neurological tests, and sadly, they came back abnormal: her brain hadn’t developed properly and her brain white matter (or myelin) was found to be atypical. Doctors confirmed she was suffering from an unidentified kind of genetic leukoencephalopathy, a family of diseases affecting both the nerve cells and the white matter. Mathilde passed away when she was two-and-a-half months old, surrounded by the people who loved her most.

Thanks to an international effort led by physician-scientists at Rady Children’s Institute for Genomic Medicine (RCIGM)-San Diego in California, Dr. Geneviève Bernard’s team at the Research Institute of the McGill University Health Centre (RI-MUHC) was able to confirm the diagnosis for Mathilde: she died from VARS-related disorder, an extremely rare neurodevelopmental condition. Their findings, which were recently published in Nature Communications, are paving the way for the first step in developing potential therapies for this rare neurodegenerative condition.

Investigators performed advanced genetic tests on blood samples from seven children with neuro-developmental disabilities who were evaluated by doctors in San Diego, Montreal and Cairo. This led to the discovery of mutations in the VARS gene, which had not previously been linked to human disease.

“These children showed epileptic seizures and abnormalities evident on brain MRI scans,” said lead study’s author Joseph Gleeson, MD, director of neurodevelopmental genetics at RCIGM and professor of neuroscience and pediatrics at UC San Diego School of Medicine. “Although no treatment currently exists for this condition, the results are important as the first step in guiding research directed at targeted therapies.”

The genetic mutations identified in the study led to a defect in the enzyme responsible for generating proteins containing the amino acid valine, which is necessary for cellular health. Genetic variations that damage these types of enzymes are associated with a variety of human diseases including microcephaly and neuropathy.

In this study, the team found that enzymatic activity was significantly reduced in cells from their young patients. The findings suggest that children with this disorder may benefit from treatments to support the synthesis of new valine-containing proteins in the brain.

The cause of genetic disabilities in many children is rarely identified. This limits the ability of doctors to develop precise treatment plans. Both whole exome and whole genome testing were conducted as part of this study. These tests search an individual’s genetic code for imperfections that are the source of disease.

"Trying new approaches to understand these diseases is important. Having an answer about what’s making their child so sick helps families grieve," added study co-author Geneviève Bernard, MD, MSc, FRCPc, pediatric neurologist and a researcher with the Child Health and Human Development Program of the RI-MUHC.

“The diagnosis gave us some closure,” said Mathilde’s father, Gabriel. Because their daughter’s disease was so rare, they agreed to take part in further research into the disorder. “It felt good to know that our daughter could help other children and the scientific community at large.”

Patient evaluation and testing for this study was conducted at Rady Children’s Hospital-San Diego, the Montreal Children’s Hospital of the McGill University Health Centre and the National Research Center in Cairo. Medical research institutions in Amsterdam, Hong Kong, Qatar and Egypt also played a supporting role in confirming the biologic impact of the mutation in the VARS gene.

“For ultra-rare conditions such as this one, collaboration among multiple research institutions is crucial to confirm that changes identified in the genetic code may be common to multiple children with similar clinical symptoms,” said study co-author Jennifer Friedman, MD, neurologist at Rady Children’s Hospital and professor at UC San Diego School of Medicine.

“Such cooperation and patient matching plays a critical role in the identification of new genes and provision of diagnoses to geographically dispersed individuals with the same rare disorder,” Dr. Bernard added.

In future experiments, the researchers hope to test whether dietary supplementation with valine or gene therapy may help to restore the altered protein in the brain of these children.

This research was made possible in part by support provided by The McGill University and Génome Québec Innovation and Centre Compute Canada.

The Institute is leading the way in advancing precision healthcare for infants and children through genomic and systems medicine research. Discoveries at the Institute are enabling rapid diagnosis and targeted treatment of critically ill newborns and pediatric patients at Rady Children’s Hospital-San Diego and partner hospitals. The vision is to expand delivery of this integrated translational research process to enable the practice of precision pediatric medicine at children’s hospitals across California, the nation and the world. RCIGM is a subsidiary of Rady Children’s Hospital and Health Center. Learn more at www.RadyGenomics.org. Follow us on Twitter and LinkedIn.

About the Research Institute of the MUHC

The Research Institute of the McGill University Health Centre (RI-MUHC) is a world-renowned biomedical and healthcare research centre. The Institute, which is affiliated with the Faculty of Medicine of McGill University, is the research arm of the McGill University Health Centre (MUHC) – an academic health centre located in Montreal, Canada, that has a mandate to focus on complex care within its community. The RI-MUHC supports over 420 researchers and close to 1,200 research trainees devoted to a broad spectrum of fundamental, clinical and health outcomes research at the Glen and the Montreal General Hospital sites of the MUHC. Its research facilities offer a dynamic multidisciplinary environment that fosters collaboration and leverages discovery aimed at improving the health of individual patients across their lifespan.

The RI-MUHC is supported in part by the Fonds de recherche du Québec – Santé (FRQS). www.rimuhc.ca.