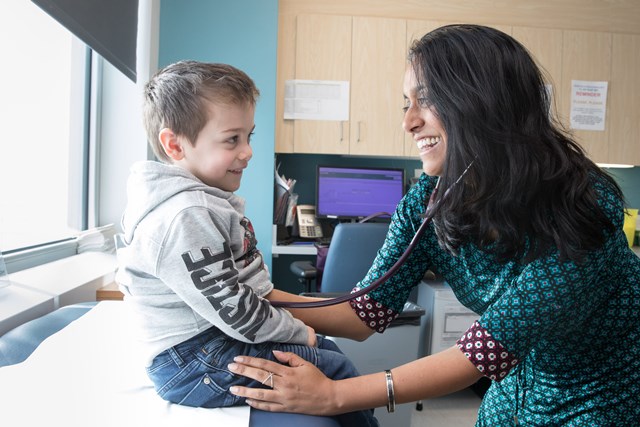 Every night, before Mélissa Dupras and her partner, Hans Doyon, go to sleep, they double-check to make sure they gave their son Léo all his medications.

“Did you give Léo his injection today?” asks Mélissa.

“Yup,” says Hans. “How about his Pediapred and Synthroid?”

This late-night ritual has now become part of their daily routine, but it wasn’t always the case. Their four-year-old son Léo was born with a rare congenital disease, called panhypopituitarism. The condition is defined by a deficient production of hormones from the pituitary gland.

The pituitary gland is the size of a pea. It sits behind the bridge of the nose and is attached to the base of the brain. It’s an important part of the body because it produces many hormones and also stimulates other glands to produce hormones of their own. There are many different variations of panhypopituitarism, but in Léo’s case, he suffers from the “classic triad”. The front part of the gland is small in size and the back section is not in the right place. The stalk that attaches the pituitary gland to the brain is also missing.

“Because of this anomaly, Léo’s body doesn’t produce cortisol, as well as growth hormones and thyroid hormones,” explains Dr. Preetha Krishnamoorthy, one of the pediatric endocrinologists who follows Léo at the Montreal Children’s Hospital. “We therefore have to give his body what it’s missing in order to maintain good health.” Every day, Léo is injected with a synthetic growth hormone. “To date he’s probably had over 1,400 injections,” says his mother, Mélissa.

The growth hormone not only helps him grow, but also helps regulate his glucose levels. When he was born, his sugar levels were at 0.2. “Anything below three is considered low,” says Dr. Krishnamoorthy. “It’s important to investigate low blood sugar in newborns, also known as hypoglycemia, because it’s often linked to something more serious.” The brain needs sugar and since it’s an energy-demanding organ, many of its functions, like memory and learning, are closely linked to glucose levels. “This is why recurrent hypoglycemic episodes can affect neurological development,” says Dr. Krishnamoorthy.

Léo is currently being prescribed a standard dose of growth hormones, but he’s re-evaluated every three months by the Children’s Endocrinology department. “We look at his weight and height and see if any adjustments to his prescription need to be made,” says Dr. Krishnamoorthy. “Synthetic growth hormones act like normal growth hormones. This means that Léo could very well reach his full growth potential.” Even after reaching his final adult height, Léo may continue to take synthetic growth hormones because it helps stabilize the metabolism and energy levels.

The production of cortisol is also essential because it regulates the body’s metabolism, blood pressure and immune response. It also helps the body respond to stress. When a child gets sick or seriously injured, the body automatically produces extra cortisol, but that’s not the case for Léo. “When Léo gets sick we have to double his cortisol medication so that his body can fight off the infection or virus,” says Mélissa. “He was once hospitalized for four days because he caught a gastro and his body wasn’t strong enough to fight it off. Now as a preventative measure, we take him out of daycare every time a virus is going around.”

Having lived with this condition as long as he can remember, Léo is able to name all his medications, knows that it’s important to check his sugar levels regularly and has no problem saying the word ‘panhypopituitarism.’ “Even I still have a hard time saying it,” laughs his mom. Through Facebook, Mélissa has also managed to find other mothers whose children suffer from the same condition. “Coincidentally, they all happen to be boys and under five years old,” says Mélissa. “Even though we’ve never met in person, we communicate regularly and we’ve developed a strong relationship. It’s nice to know we’re not alone.”