Managing and preventing psychosis: it takes a team 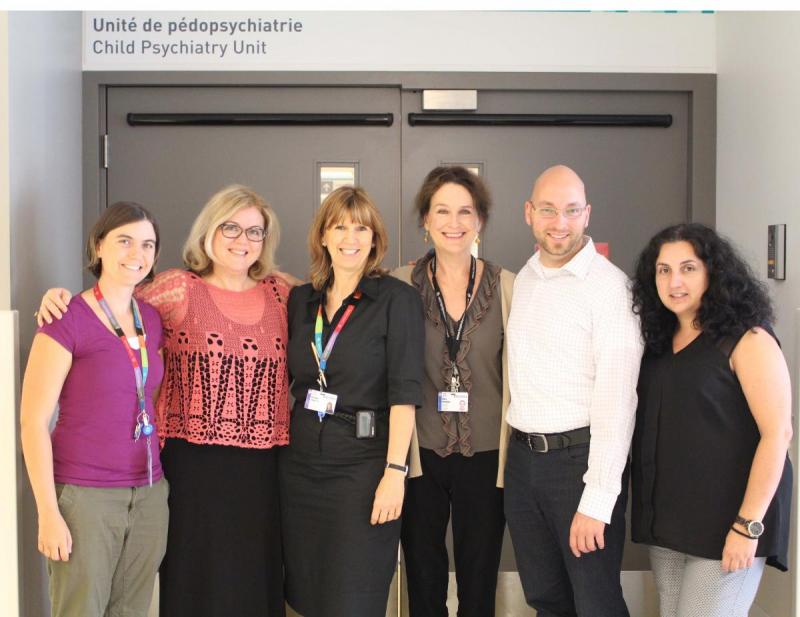 About three out of every 100 people will have a psychotic episode in their lifetime. And while psychosis is a serious condition that needs prompt treatment, many people recover from a first episode of psychosis and never experience another psychotic episode again. The key, say experts, is prompt and effective treatment that aims to get teens back to their regular lives as quickly as possible.

Thanks to an innovative and intensive First Episode Psychosis Clinic at the Montreal Children’s Hospital, vulnerable patients hospitalized for psychosis are doing just that: getting the comprehensive care and support they need as early as possible, leading to many positive outcomes.

A first episode of psychosis usually occurs in a person’s late teens or early twenties. “When we say that someone is experiencing psychosis, we’re referring to symptoms that indicate the person has lost touch with reality,” explains Michèle Paquette, Clinical Manager of the Montreal Children’s Hospital’s Child Psychiatry Department. “Symptoms of psychosis can include erratic behaviour, increased isolation, fear of others, lack of concentration and paranoid thoughts. It’s extremely important that we get to the bottom of what’s causing a patient’s symptoms so that we can address them as quickly as possible.”

There can be a number of reasons a patient is experiencing psychosis, ranging from a chemical or hormonal imbalance, drug use, or an unrelated medical condition or an untreated mental illness. “Psychosis is not exclusively caused by mental illnesss, but can be present in the context of another disease,” explains Michèle. “Our goal is to do a medical assessment as soon as possible to get a sense of why these symptoms are present, and understand what might be triggering this response.”

A unique model to treat patients quickly and efficiently

Based on a clinic model introduced at the Douglas Hospital in 2008, the First Episode Psychosis Clinic has only been in place for roughly four years at the Montreal Children’s Hospital, but is the only clinic of its kind in the province that treats patients under the age of 16. Together, a team made up of a psychiatrist, an occupational therapist, a social worker, a psychologist, a nurse and social counselors intervene to come up with care plan that relies heavily on psychoeducation, and working with families, schools and community resources, so that patients can spend less time in hospital and more time at home, surrounded by a network of support.

“What we know is that early and intensive intervention when a patient has just experienced an episode of psychosis greatly reduces the likelihood of developing more chronic problems later on, and leads to less hospitalizations and fewer relapses in patients,” says Michèle. “We therefore work to ensure that patients are evaluated within 24 to 72 hours of an episode, and we liaise immediately with community partners to ensure that patients receive prompt intensive follow-up closer to home, or that they come back as outpatients, and that they are compliant with medications that may be prescribed to help them.”

When it comes to children and teenagers’ mental health, Michèle insists parents should always trust their gut and seek the advice of a community health professional if they notice their child is behaving differently. “We chalk a lot of things up to being an adolescent. But some behaviours are beyond just being a teen. It’s important to talk to your child if you notice these changes, and to take your child to see a medical professional at your local community clinic or family doctor’s office to investigate further. There could be something going on physically that can be contributing to these behaviours.”

The benefits of seeking help early and being proactive, says Michèle, is that patients go on to do remarkably well. “Close and intense follow-up when these changes in bahviour first start creates a trusting relationship with healthcare professionals that ensures a better level of compliance to treatment,” she adds.

What’s more, it ensures that patients feel equipped to deal with similar triggers when and if they come up in the future, building lifelong coping strategies. On the whole, however, the greatest benefits are seen in terms of how this strategy greatly reduces the risk of suicidality in a particularly vulnerable patient population.

“Intervening early and intensively has so many benefits, but most of them are really seen long term. On the whole, patients require less hospitalizations, they experience fewer relapses, and they typically experience less chronic problems later on in life. It’s extremely positive,” says Michèle.

“A very large proportion of the patients seen in our clinic will be able to go back to their regular lives and be able to pursue their goals without ever experiencing a psychotic episode again. When you think of how many vulnerable patients we can effectively help in using this strategy, it’s very encouraging.”