Maxime: Living at home with a rare disease 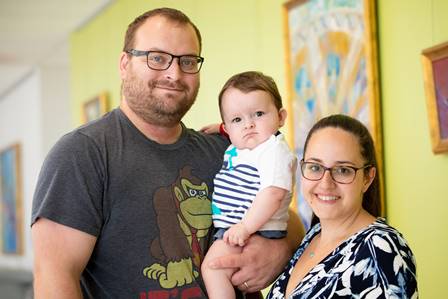 For those who meet Maxime for the first time, there’s little that would tell them he lives with an extremely rare genetic disease. “He’s always happy,” says his dad Jasmin. “He’s the easiest baby—so curious and always wanting to look at everything.”

Maxime was born in October 2017 at LaSalle Hospital, and within hours of his birth, it was clear that something was wrong. He had continuous diarrhea and was becoming seriously dehydrated, causing him to quickly lose weight. Within three days, he was transferred to the neonatal intensive care unit (NICU) at the Montreal Children’s Hospital and was immediately put on an IV for rehydration. He was given a number of different feeding formulas to address the problem but his diarrhea continued. After several days, Jasmin and his wife, Vanessa, met with gastroenterologist Dr. Ana Sant’Anna, who suspected Maxime might have microvillus inclusion disease (MVID), a condition she had seen while working at McMaster University Medical Centre in Hamilton. A biopsy was requested, and the results confirmed that her hunch was correct.

MVID is an extremely rare disease, with estimates varying between 100 and 200 known cases around the world. The condition is characterized by chronic, watery, life-threatening diarrhea that usually starts in the first hours of life. MVID is usually caused by a mutation in a gene which is responsible for making the myosin Vb protein. An absence of myosin Vb inhibits certain cells in the small intestine from producing microvilli, which absorb nutrients and fluids from food as it goes through the intestine. The key problem for children with MVID is they can develop malnutrition and dehydration, and in turn, other problems related to growth and development. Their nutritional support must come from intravenous feeding, also known as total parenteral nutrition (TPN).

A longer than expected stay

Maxime spent about five weeks in the NICU so he could gain weight and grow a bit, and when he was stable enough, he was moved to the hospital’s B09 inpatient unit. The family didn’t expect that this would be home for the next seven months. Dr. Mylène Dandavino, Program Head of Medical Inpatient Services, explains that many families who transition through the B09 unit have children who will need technological support at home. “The diagnoses we see can vary greatly, and families are sometimes here for long periods before their child can safely be cared for at home,” she says. “They have to learn a lot in order to care for their child at home. They meet many physicians, nurses, and other healthcare providers, and given that we’re a teaching hospital, they also meet residents and students. Maxime’s family, like many others, was very resilient in adapting to this staff turnover and to life on the unit. They are one of many amazing families we have had the chance to meet and work with.”

Maxime was put on TPN which is a feeding method that bypasses the gastrointestinal tract by giving fluids into a vein to provide nutrients the body needs. The feeding is done through a peripherally inserted central catheter (PICC) inserted into the patient’s arm, and it provides them with amino acids, vitamins, minerals, and lipids. Regular blood and urine tests help the health care team know what adjustments are needed.

Annie Chaput, Nurse Clinician in the hospital’s Complex Care service, met Jasmin and Vanessa shortly after they arrived on B09. “We started teaching them how to do the TPN because we thought they’d be able to go home fairly soon,” says Annie. “Normally our patients don’t go home until they can be off TPN for six hours a day.” Maxime was on TPN around the clock, and when they first tried to take him off the feeding for just a few minutes, he immediately developed hypoglycemia, a potentially life-threatening condition for him. “Early on, we considered the possibility of letting Maxime go home on 24/7 TPN, but his parents wanted to wait a bit to see if things improved.” By February, Maxime still needed TPN around the clock, but since he was stable and had no other health problems, Jasmin and Vanessa made the decision with the team to start the process of going home, which involved coordinating with the CLSC for nursing and other support. On June 21, Maxime went home for the first time.

A new life at home

Maxime now has regular appointments in Complex Care where his team includes Annie, nutritionist Marie-Josée Trempe, Dr. Sant’Anna, and pediatrician Dr. Hema Patel. In July, the Complex Care team decided to try taking him off TPN again, and this time it was successful. The pump Maxime has at home can taper down the infusion so that his body slowly adjusts and he doesn’t develop hypoglycemia. “The first time we tried it and stopped the infusion through Maxime’s PICC, his glucose levels were good for a full hour,” says Annie. They experimented further, and now Maxime can go four hours a day without TPN.

One of the considerations about being at home is the risk of an abrupt change such as a problem with the PICC, or if the pump stops working all of a sudden. There isn’t much time to react. Jasmin and Vanessa have a Glucagon injection at home which they can give to Maxime if that ever happens. Eventually, the Complex Care team will reintroduce the challenge of these sudden changes to see if things have improved and if Maxime’s body is working it out by himself.

Maxime’s parents are also introducing small amounts of food to him, which helps him develop his ability to chew, as well as contribute to his speech development.

Recently, Annie, Marie-Josée and Dr. Sant’Anna spoke to Dr. Bram Raphael at Boston Children’s Hospital, who has worked with children with MVID. “We found nothing in terms of research in the past decade, so it was really helpful to talk to someone who agreed with our diagnosis and treatment approach with Maxime,” says Annie. At the end of September, they’ll attend a conference on intestinal failure in pediatrics. “We’re hoping to be able to discuss Maxime’s case with others and learn more about different issues surrounding intestinal failure,” says Annie. “And mostly, we’re hoping to be able to speak with other people who have encountered MVID in their practice.”

You can give Maxime a chance to reach his full potential by making a donation to the Montreal Children's Hospital Foundation.