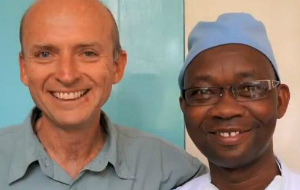 OTTAWA, April 1, 2014 - A Canadian pediatric surgeon who’s dedicated his life to treating needy children throughout eastern Africa has been awarded the prestigious 2014 Teasdale-Corti Humanitarian Award by the RoyalCollege of Physicians and  Surgeons of Canada.

"Dan Poenaru is an extraordinary surgeon who has often placed himself in situations of danger and deprivation so that he could help patients," said Andrew Padmos, MD, FRCPC, CEO of the RoyalCollege.  “He embodies the values of dedication, courage and heartfelt humanitarianism that define the Teasdale-Corti award.”

A graduate of the University of Toronto and McGillUniversity, Dr. Poenaru, FRCSC, was regarded as  one of Canada’s top pediatric surgeons  when, in  2003, he along with his wife and sons, left to set up a surgical practice in Kijabe, Kenya. Dr. Poenaru was motivated “by the enormous needs of African children,” not only those of Kenya, but also the numerous Somali refugees entering the country.

Since then, he has built a well-regarded pediatric surgical unit that provides vital care and treatment to thousands of children each year. Dr. Poenaru has also learned a wide variety of new surgical procedures that allow him to perform a broader range of operations on needy children.  Throughout his career, he has treated patients through civil war and in refugee camps, exposing himself to tremendous personal risk.

“The greatest reward I have received for this work has been the smiles on the faces of the children and their mothers after the surgery,” said Dr. Poenaru. “No house or cars or status in Canada can ever match that reward.”

The Teasdale-Corti Humanitarian Award is named for Dr. Lucille Teasdale-Corti, a Canadian surgeon and international aid worker, and for her husband Dr. Piero Corti — both of whom contributed significantly to the development of medical services  overseas. It recognizes physicians and surgeons who go above and beyond the norms of practice to provide health care and medical services worldwide.

This award is a prestigious element of the RoyalCollege’s awards and grants program, which distributes more than $1 million dollars a year through awards, grants, fellowships and visiting professorships.

The Royal College of Physicians and Surgeons of Canada is the national, not-for-profit organization that oversees the medical education of specialists in Canada by setting high standards for postgraduate medical education and continuing professional development. In collaboration with health organizations and government agencies, the RoyalCollege also plays a role in developing sound health policy in Canada.