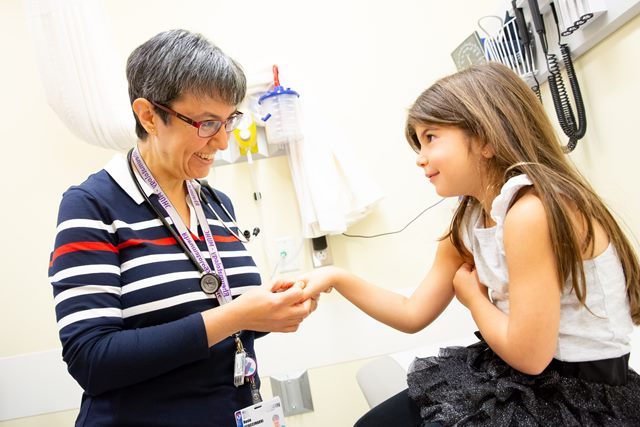 Five-year-old Emersyn Shragie loves to colour, but two years ago she stopped being able to hold a crayon. Her family first started to notice something was wrong during a family vacation in December 2016. Emersyn would wake up feeling normal, but by mid-afternoon, her whole body was covered in little red welts. “We thought they were hives,” recalls her mother, Natalie Ornstein. “Every morning she would wake up with clear skin, but then 3pm would roll around, and she would start having a high fever and the hives would come back.”

From bad, to worse

After returning home, Natalie brought Emersyn to her pediatrician, who subsequently referred her to an allergist. She was prescribed a high dose of antihistamines, but the hives continued to appear on a daily basis. “We thought maybe she was allergic to something or that they were related to some kind of stress,” says Natalie. Emersyn continued to visit pediatricians and allergists, who all believed she was suffering from a form of chronic hives, but Natalie couldn’t shake the feeling that something was very wrong.

Then in March, Emersyn woke up one morning screaming that she couldn’t walk. She also stopped being able to feed herself, get dressed or walk down the stairs. “She would slide down on her bum like a baby,” says her mom. Her hands and feet began to swell and her skin started to peel. She also stopped colouring.

Unsatisfied with their daughter’s diagnosis, Natalie and her husband, Shannon, asked to have more blood work done. “The results were shocking,” she says. “Everything was abnormal.” Natalie immediately brought Emersyn to the Emergency Department (ED) at the Montreal Children’s Hospital (MCH), where the ED physician noticed something in Emersyn’s fingers: arthritis.

Within the first 10 minutes of meeting Emersyn, Dr. Rosie Scuccimarri, a pediatric rheumatologist at the MCH, knew what was ailing her. The toddler was diagnosed with Systemic-onset Juvenile Idiopathic Arthritis, a rare, and potentially life-threatening form of chronic arthritis. This type of arthritis not only affects a patient’s joints, but can also affect their organs, specifically the lining of the heart, as well as swelling of the liver, spleen and lymph glands. “We were shocked, but relieved at the same time,” says Natalie. “We finally knew how to help her.”

Over thirty of Emersyn’s joints were affected, everything from her hands, knees and ankles. Her fingers were so swollen that she couldn’t close them to make a fist. She was also severely anemic and her lymph nodes were inflamed. “Because her inflammation was so significant, we were worried about a cytokine-storm which can occur when inflammation becomes uncontrolled,” says Dr. Scuccimarri.

A cytokine-storm is when the body starts overproducing cytokines, a type of small protein produced in response to an infection or an inflammatory disease. Cytokines have the ability to alter the behaviour of other cells, which can lead to very serious complications, like macrophage activation syndrome. “Macrophages are a type of white blood cell and are usually helpful to the immune system, but cytokines can turn them from good to bad,” explains Dr. Scuccimarri. “They start eating up other cells, likes platelets, as well as red and white blood cells. If this is not caught early on, a patient can die rapidly. Thankfully for Emersyn, we were able to stabilize her condition before it got to this point.”

In order to avoid a cytokine-storm and to decrease her inflammation, Emersyn was prescribed a number of different drugs, including corticosteroids, a type of powerful anti-inflammatory drug. She now takes four pills a day, and receives three injections at home on a weekly basis, a task she shares with her mother. “I was diagnosed with Crohn’s disease in my twenties and I’m currently in remission, but I still need to give myself preventative injections once a week,” says Natalie. “On Saturdays, Emersyn gets her injection first and then she holds my arm while I inject myself. It reassures her to know that she doesn’t have to do this alone.”

Emersyn also visits a physiotherapist and occupational therapist to help with her mobility. “We do a lot of exercises at home through play, like picking up the little pieces in Light Brite. Her fingers are the worst affected by the arthritis, so we try and work on that,” says her mom. Because her disease is rare, Emersyn is also part of a Canadian study group that is currently looking into its long-term prognosis. “We only see two or three of these cases a year at our hospital, and we don’t know what the underlying cause of it is. We believe its multi-factorial, but we’re not sure if it’s genetic or triggered by an infection,” says Dr. Scuccimarri. “Our goal is to put these types of diseases into remission by treating them aggressively.”

Since being diagnosed, Emersyn has come a long way. Only six of her joints are now affected and she started colouring again. “I like to colour Cinderella,” she says. In September, she began kindergarten and started sleeping in her own bed, a big accomplishment which warranted a new bravery bead. “Emersyn has over 75 bravery beads and each one represents a different procedure or treatment she had to endure,” explains Natalie. “She is very proud of them and we are so proud of her.”