Paying it forward on Mother’s Day 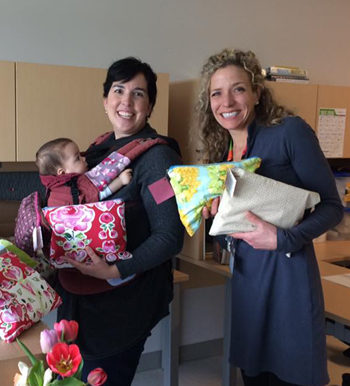 Mother’s Day can be a difficult day for moms whose children are hospitalized. But thanks to a group of generous mothers from the South Shore, Children’s moms were treated to a beautiful gift on May 14th. Through the thought and care put in to every detail, it contained an empowering message: stay strong and we stand beside you.

Bringing Blessing Bags to the Children’s

“I had heard of Blessing Bags being put together for different groups of people and thought, the moms at the Children’s really deserve something special like that for Mother’s Day,” says Erin Egan, who brought the idea forward to a Facebook group of local moms a few weeks ago. “I know how to sew, so the idea was to make a bunch of hand-sewn bags that moms could re-use, and fill them up with useful things that could be helpful to them while in hospital.”

Erin posted the idea to the group, with the goal of collecting 12 different items from different moms who would be interested in supporting the project. “Within a very short amount of time, I was flooded with comments from other moms who wanted to help,” she says. “In just 8 hours, every item I had asked for was covered, with individuals donating 10 to 20 dollars’ worth of items like lip balm, toothpaste, shampoo, body lotion, gum and tea.” The initiative was such a success, that moms continued to contact Erin with other ideas of things that could be included, such as coffee shop gift cards. 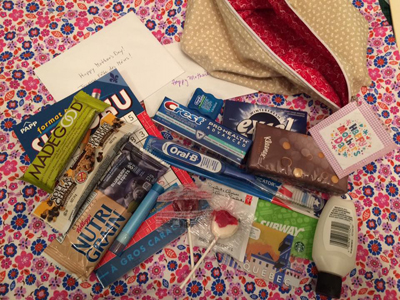 In all, five other mothers helped contribute to sewing the bags, and over fifty other mothers contributed financially or gave their time to coordinating their assembly and distribution for Mother’s Day delivery. “But my favourite part,” says Erin, “is that everyone contributed a handwritten note to the bags.” The result is therefore a deeply touching personal gift from one mother to another, with individual wishes to help make a difficult Mother’s Day easier.

Thao Ngo, a pharmacist in Hematology-Oncology at the Children’s, happened to get wind of the Mother’s Day Blessing Bags idea through the same Facebook group where Erin launched the initiative online. Given her experience working in the hospital environment, Erin says she leaned on Thao heavily for advice about what to include in the gift bags and how to go about making sure they contacted the right individuals to get them distributed.

“I was happy to help Erin and the other moms,” says Thao. “But I also had personal attachment to the project, because my son was hospitalized in the Pediatric Intensive Care Unit (PICU) for a few days last year, and I remember how hard it was. As a mom, you just lose track of basic things like wearing the same socks for four days. It thought it was a beautiful idea to support moms, and to let them know we haven’t forgotten how hard it is for them on such a special day.” 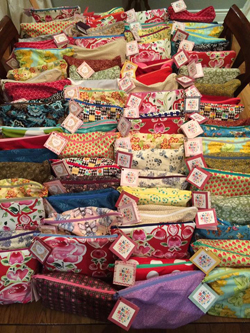 Paying it forward after a difficult experience

For her part, Erin says she was inspired to give back after her daughter, Tessa, was born last summer. “She was delivered by emergency C-section at 34 weeks in severe distress due to what turned out to be two full knots in her umbilical cord at Charles Lemoyne Hospital,” she explains. “We were lucky in that she didn’t ever need to be transferred to the Children’s and is perfectly fine now. But while I was in the hospital with her for 12 days, a friend of mine amassed an army of our mutual friends to support me.  They washed and sorted baby clothes, sent me care packages in the hospital, sent food and baked goods to my house, babysat my other kids, gave me gift certificates for groceries and house cleaning, and sent me kind words of encouragement. It was all of them who inspired me to start this.”

Given that the initiative was such a success this year, Erin says she already has plans to continue with the project next year and hopes to reach an even greater number of moms through it all.

“As moms without kids in the hospital we feel really lucky,” she says. “It feels really good to be able to give a little pick-me-up to another mom who needs it. All moms deserve a special something on Mother’s Day.”