The Children's | Patient- and Family-Centered Care 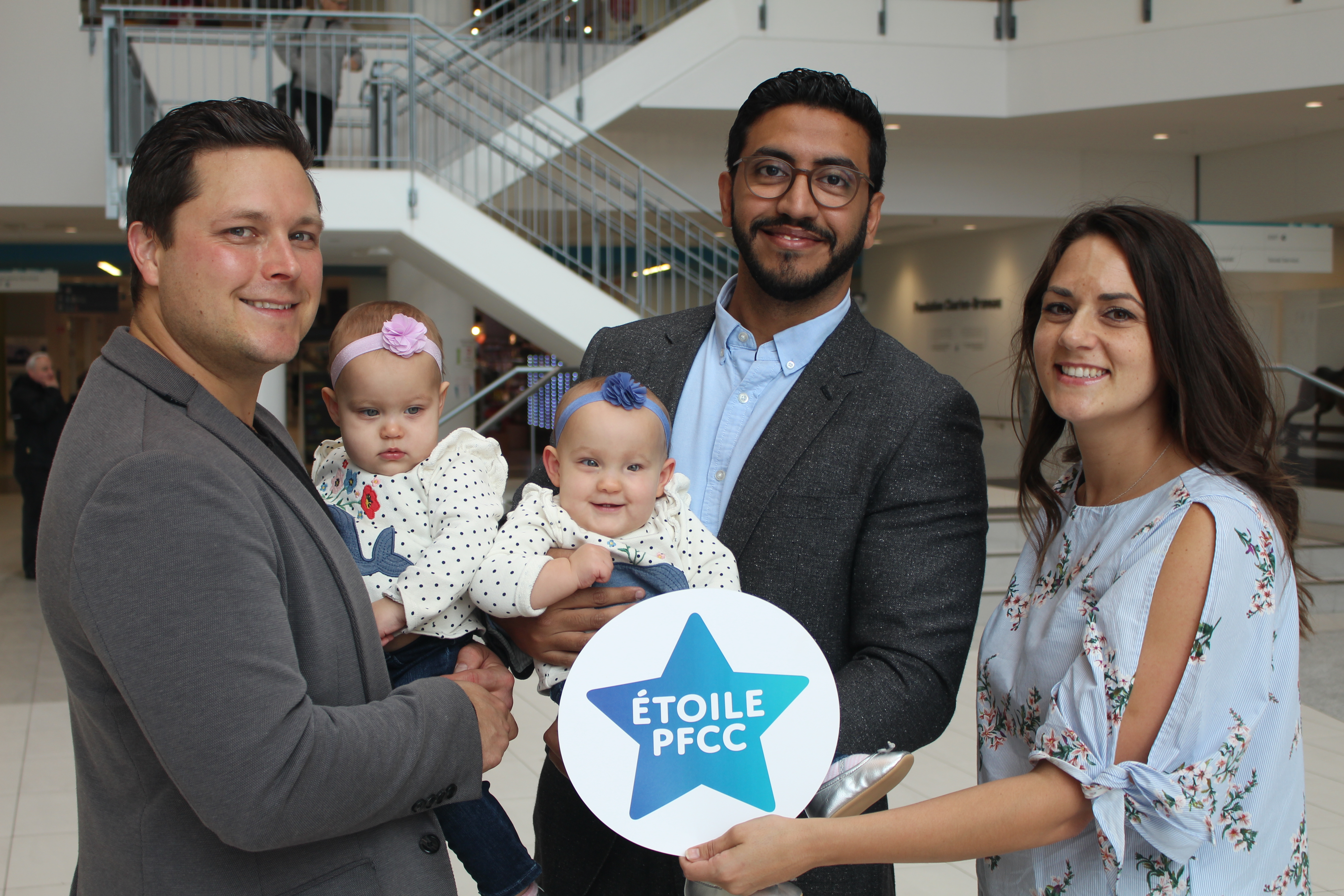 The Patient- and Family-Centered Care (PFCC) Star Award recognizes staff members who embody the idea of working in partnership with families to help them effectively take part in their child’s care. Joelle and Craig, parents of twin girls Evelyne and Chloe, recently presented the PFCC Star Award to Dr. Abdulrahman Althubaiti, an ENT resident who spent months alongside the family as they navigated an extremely challenging health problem for Chloe.

Evelyne and Chloe were born six weeks early at the Royal Victoria Hospital Birthing Centre. The team had trouble suctioning Chloe’s nose so they decided to transfer the twin girls immediately to the Children’s neonatal intensive care unit (NICU), just steps away from the Birthing Centre. Within a week, Chloe was diagnosed with bilateral choanal atresia with a deviated septum and anophthalmia, a condition that is very rare. At three weeks old, shehad her first of seven surgeries; that was the day that Joelle and Craig first got to know Dr. Althubaiti. “It was an incredibly difficult day for us,” says Craig. “Our baby’s life would be at risk without an intervention right away.  Very few procedures like this have ever been attempted on a neonate so small, so the potential for complications was very high”.

“Abdul explained in perfect detail exactly where the problem was inside Chloe’s nasal passages. He outlined the surgical approach they were going to take, and what to expect next.” Joelle and Craig thought that might be the last of their interactions with Dr. Althubaiti, but instead he assured them he’d be watching Chloe’s condition and progress very closely on a daily basis. “He was true to his word,” says Joelle, “and every day of our hospital stay—which lasted almost three months—he came to see Chloe and talk to us. He even checked in with us on his days off.”

Due to the complexity of her condition, Chloe required six more surgeries. “Abdul took the time to review all the radiology reports with us, went through each in detail to ensure we understood what we were up against and answered all of our questions with full attention and every attempt to keep us at ease,” says Craig.

It was Chloe’s third surgery that proved most challenging. The first two procedures did not maintain the airway, so the decision was made to take a completely unprecedented step. Team members from adult and pediatric otorhinolaryngology, as well as pediatric neurosurgery, performed the procedure in the Children’s Pediatric Interventional Brain Suite which has an intraoperative MRI.

“Abdul took on the challenge of coordinating the OR availability and surgical teams for the earliest possible date,” says Joelle. “It was evident that he wanted Chloe to come home just as much as we did too. Abdul became Chloe’s champion, and always advocated on our behalf.”

Joelle and Craig also feel that Dr. Althubaiti’s involvement extended beyond just looking after Chloe. “His exceptional care also allowed us to focus some of our attention on Evelyne who was able to come home after only three weeks in the NICU,” says Joelle. “Abdul made this more bearable for us during such a difficult time.”

Dr. Althubaiti feels that working with families is essential to caring for their child. “It’s always been a pleasure to work with families on a personal level, and my experience with Chloe and Evelyne’s parents has really been like a combined team effort. It’s the way we want to work with all families,” he says. “Honestly, it has been the best thing in the world to see Chloe grow up with a big smile surrounded by her loving family.”

Chloe’s progress has been steady and she now only needs follow-up every five months. “It’s been a long journey,” say Joelle and Craig, “but we’re so grateful to the entire team and all of the care staff for how everything has turned out.”