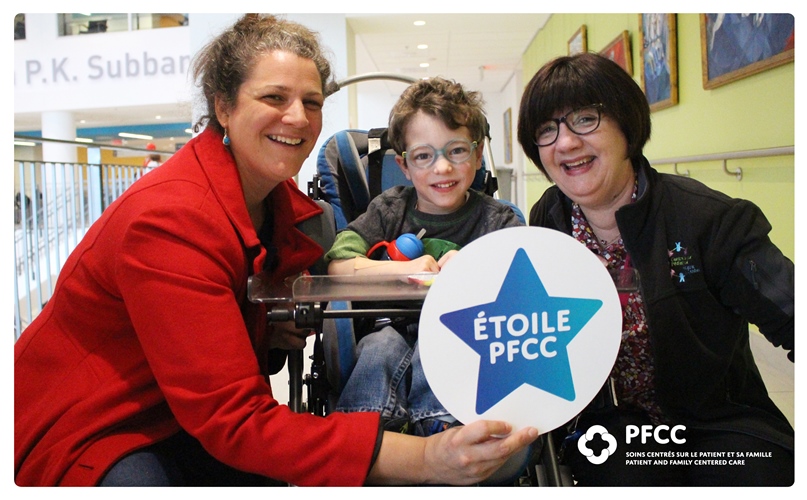 Isabelle and Olivier remember well the feeling of bringing their son Guillaume home after six months at the Children’s in both the neonatal intensive care unit (NICU) and pediatric intensive care unit (PICU), as well as on the medical floor. “It was the first time in his life that he wasn’t surrounded by machines telling us exactly how he was doing,” says Isabelle. Before leaving the NICU, the family was referred to the Children’s Complex Care Service (CCS), where they met nurse clinician Eloisa Binder. “In the year that followed, Eloisa helped us so many times in so many ways to care for Guillaume,” says Isabelle, who nominated Eloisa for this month’s PFCC Star award.

The CCS sees children with complex medical needs and Eloisa is one of nearly a dozen clinical nurse specialists who manage and coordinate care. The CCS has a number of specialized programs including the bronchopulmonary dysplasia (BPD) clinic, which is one of Eloisa’s areas. “When Guillaume first went home, he was on oxygen so we followed him regularly in the BPD clinic,” says Eloisa. In CCS, parents are encouraged to be in contact as much as they need. “I make sure they know that nothing is too minor to ask about. I keep in touch with them a lot between appointments.” In addition to BPD, Eloisa also follows post-transplant (heart) patients, and multiplex (multiple issues) children.

Understanding the journey that families take from the NICU to going home is something Eloisa knows well. Before she joined the CCS team a decade ago, she worked for a number of years in the Children’s NICU; while there she took the extracorporeal membrane oxygenation (ECMO) course and was one of the first nurses at the Children’s involved in it.

Practicing patient and family-centered care for Eloisa means treating a family the way she’d want her own family to be treated. A self-described “people” person, she feels that as a mother, she understands what parents are going through. “Parents understand and know their child so it’s important that they have their say in any discussion or decision,” she says. “Sometimes they can be intimidated about talking to someone on their child’s care team, so it’s important to make sure they feel comfortable saying what’s on their mind.” Eloisa points out that it’s not something she does consciously, it’s just the way she approaches her role as nurse. “If there’s something better that could be done for a child, or some other way to help the family, then you do your best to make it happen.”

Isabelle agrees that Eloisa always went the extra mile. Guillaume was born very premature and in the year after he went home he had significant problems with his breathing and with his feeding.  At one point, he had to be fed with a nasogastric tube. “From our first appointment in Complex Care, Eloisa was with us,” says Isabelle. “She was a huge help to us, a great listener, compassionate. She really supported us as we transitioned to looking after Guillaume at home, and was a constant support whenever we had doubts or worries.” Isabelle also says that the communication and the trust they developed with Eloisa was very important to them “We felt like a partner in Guillaume’s care, and that meant everything to us.”