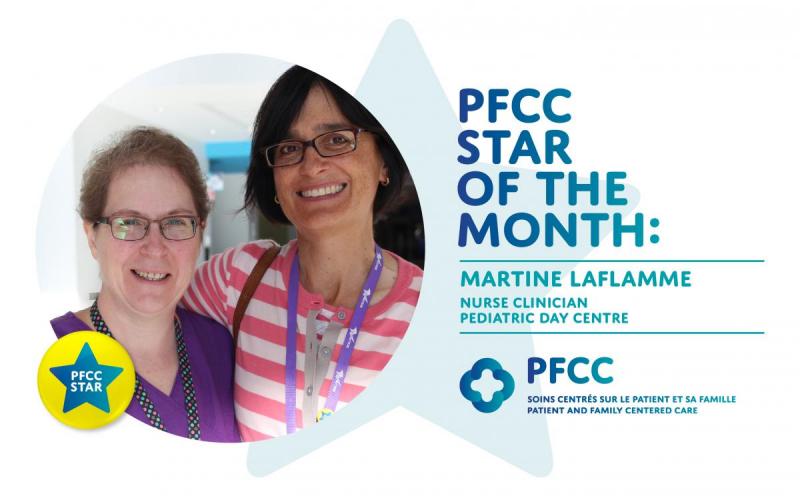 Dr. Indra Gupta, who received the Children’s PFCC Star award in August, nominated her colleague Martine Laflamme, to receive the award this month.

“Martine really embodies the idea of patient- and family-centered care,” says Dr. Gupta. “It’s always been so easy to work with her because she’s always there for the patients and families.” Dr. Gupta points out that the Day Hospital where Martine works is very front line in terms of caring for patients. “She takes such tremendous care with everything she does, and looks after every detail. My patients are always happy to see her.”

Martine has worked in the Children’s Day Hospital for six years, and before that worked on the hospital’s medical inpatient unit and in several different departments. Martine was drawn to the idea of working in the Day Hospital, which has evolved significantly in the past decade to allow children with serious and chronic diseases to come to the hospital for treatment but still go home at the end of the day. “In the past, many of these children would have been admitted for lengthy periods so we’ve made so much progress in helping them spend less time in hospital,” explains Martine.

Martine says her colleagues in the Day Hospital make up an incredible team and she credits the Child Life staff with teaching her a lot about finding ways to put children at ease. “You have to prepare a child both physically and emotionally for a treatment or procedure,” she says. “You don’t really succeed by going quickly; you have to take your time and figure out what will work best for each child.” Martine says some of her most satisfying experiences are when she can help a child overcome their fear or anxiety about a treatment.

Dr. Gupta says Martine often takes care of things that families aren’t even aware of. She recalls how Martine once asked the pharmacy to help solve a problem so that one of her patients wouldn’t have to stay in the Day Hospital for an entire day. “These are things that parents don’t always know about, but they can make such a difference to the child’s well-being.” She also says that the patients and families who come to the Day Hospital are there frequently and for many hours at a time. “They remember their experience here for a long time, and it’s people like Martine who are a big part of that.”

Martine has developed real bonds with many of the children she sees, and despite the serious conditions that her patients deal with, Martine finds they are often quite resilient. “That’s one of the good things about working with kids,” she says, “you stay young!”