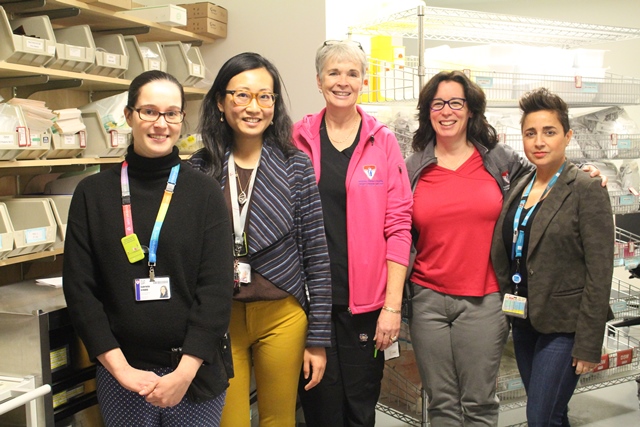 A key mandate for the Quality Improvement committee

The Pediatric Intensive Care Unit (PICU) at the Montreal Children’s Hospital (MCH) formed a Quality Improvement Patient Safety Committee (PQUIPS) made up of a multidisciplinary group of caregivers, including doctors, nurses, parents and pharmacists. Ni Nora Ruo is a pharmacist in the satellite pharmacies of the intensive care units. As part of PQUIPS, Ni Nora heads a sub-committee that examines medication safety.

“Medication errors are the most frequent medical errors in hospitals,” explains Ni Nora. In an effort toimprove medication safety, she and her committee first mapped out the medicine management process, from the moment a medication is prescribed to the moment it is administered to a patient. The multi-step process was then compared to incident reports from the previous year to identify where the weak points are in the process. “Sometimes, the cause for error is as basic as illegible handwriting,” she says.

The committee was then able to prioritize four areas of focus: prescription ordering, review of the administration method of the medication, the independent double check for high alert medications, and a review of the administration plan. Each area of focus is then studied in detail using the Healthcare Failure Mode and Effect Analysis, which is used to identify potential causes leading to medication errors and to prioritize areas for improvement using an algorithm.

To raise awareness on some of the identified issues in an interactive way, the members of the sub-committee organized a simulation where participants from across the hospital could participate by identifying medication errors surrounding a mannequin. The activity was well received with a high percentage of participants finding the exercise educational and with an equally high percentage of participants saying that they plan on changing the way they handle medication.

Another aspect of medication safety that the sub-group is immediately rolling out is a parent survey asking how involved they would like to be in the prescription and administration of medication for their child. The questionnaire—approved by the hospital’s Research Ethics Board–will help the committee understand how best to involve parents and how much information is too little versus too much for a parent. “A parent knows their child best, so we believe that a parent’s involvement can improve the quality of overall care the child receives,” she says.