Rhythm of the heart 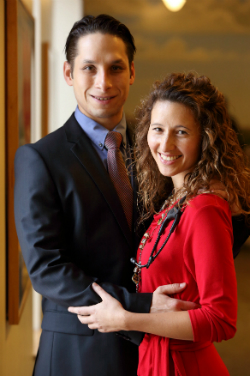 Dirty Dancing might be one of the most-watched chick flicks of all time. Not sure if it’s Baby’s awkwardness, the movie’s soundtrack or Patrick Swayze’s smile, but something continues to resonate with women and girls of all ages. Most of us have either attempted--or really, really wanted to attempt--jumping into someone’s arms just to know what it feels like to soar across a room full of people in the middle of a dance floor. That climactic scene has been replayed over and over again on the big screen, and also in Dr. Nadine Korah’s life.

In August 2011, Dr. Korah was asked to participate in the first edition of the McGill University Health Centre’s “Dancing with the Docs”, a fundraising event that saw MUHC doctors perform choreographed dance routines for charity. As a fourth-year resident at the Montreal Children’s Hospital, Dr. Korah jumped at the opportunity and was paired with three-time Canadian Professional Dance Champion, Christopher Panasuk, from the Arthur Murray Dance School. They spent six weeks together learning the steps to a lively Samba routine. “A lot of our lessons felt like scenes out of Dirty Dancing,” she laughs. “There I was, spaghetti arms and all, while Chris taught me how to stand up straight and work a room!” The weeks of practice eventually paid off as Dr. Korah came in second place and even managed to receive perfect scores. She also walked away with a date.

After the show was over, Christopher rustled up the nerve to ask her out and they’ve been dating and dancing ever since. Over the last two years, her passion for dance has grown exponentially and you can feel it just by talking to her. Tango, Samba, Salsa, Swing, the Viennese Waltz, she loves all of them for different reasons. “Chris has opened up my eyes to a whole new world,” she admits. “Dance is now a big part of my life.”

As a general pediatrician, Dr. Korah spends many hours at work and outside of work thinking about her patients. At times, the stress has been overwhelming and it’s been hard for the young physician to disconnect from her work. Earlier in her career, she tried going to the gym and taking yoga classes, but she could never completely clear her mind. Dance changed all that. “When I dance I can only think about dancing. I can’t think about my patients or work because I have to focus on my posture, my hands, my feet, whether or not I should go left, right, backward, or forward,” she says. “It’s the only time in my life that I’ve been able to shut off my brain and just enjoy myself. I have Chris to thank for that.”

And when asked if the couple is a big hit at weddings, Dr. Korah excitedly replied, “Yes! We constantly get asked to perform that lift from the movie. And the men always want to learn how to dip their wives!”