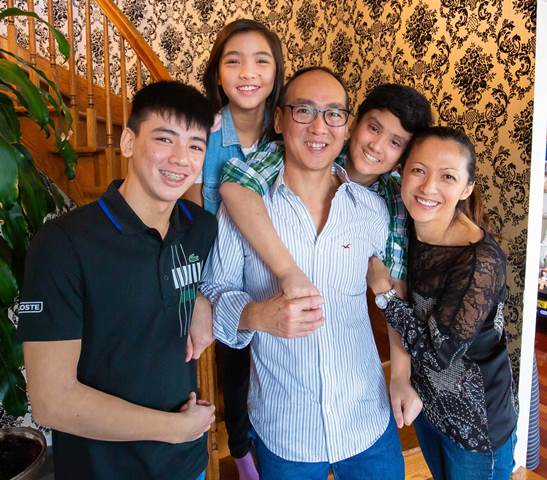 It all started with a fever. For two months, ten-year-old Thomas Trinh’s temperature kept rising and falling, his body ached and his face was swollen. Then in January 2015, his mother, Year Ny Khut, had a feeling that something was very wrong. She brought him to the Emergency department (ED) at the Montreal Children’s Hospital (MCH) where a doctor noticed a few small bruises on his back, arms and legs. “The bruises were so small, they were about the size of a small fingernail,” recalls King Trinh, Thomas’s father. The hospital ran a few tests and confirmed the worst: Thomas was suffering from a type of lymphoma.

Lymphoma is a form of cancer that affects the body’s lymphocytes, an infection-fighting group of cells found in the immune system. The disease causes lymphocytes to change and grow out of control; but Thomas was showing signs of an even rarer condition. “It took the team about a month to diagnose him and figure out the appropriate treatment,” says Year Ny. “His doctors said they had only seen two of these cases in their entire career.” Thomas was diagnosed with subcutaneous panniculitis-like T-cell lymphoma.

“It was a complete shock to us,” says Year Ny. “Nobody in our family had ever had cancer. Could we cure him?” By this point, Thomas’s face was so swollen he could barely open his eyes, but his chemotherapy treatments were not working. The MCH oncology team suggested a bone marrow transplant. The entire family was tested and Thomas’s older brother, Brandon, ended up being a perfect match. The transplant was a success and Thomas slowly started to feel like himself again. “We were so happy to be able to put all this behind us,” says Year Ny. Sadly, that feeling was short-lived.

A year after Thomas was diagnosed, his younger sister, Meagan, started to complain about a swollen eye. “One of her eyes was red and puffy, but we didn’t think it was anything serious. We brought her to the ophthalmologist for some eye drops,” says her father. Then a month later, Meagan’s temperature started to fluctuate and she noticed something peculiar on her leg – a small bruise. “My heart sunk when she showed it to me,” recalls Year Ny. “It looked exactly the same as the ones Thomas had. I couldn’t believe it.” The family insisted doctors perform a biopsy on Meagan, and shockingly, they received the same diagnosis: subcutaeous panniculitis-like T-cell lymphoma.

“How was it possible that this rare disease could affect two people in the same family, in the same year?” asks King. “Why was this happening to us and more importantly, why was it happening to them?” Pediatric hemato-oncologists, Drs. Sharon Abish and David Mitchell, began to suspect that the condition could be genetic. They contacted their colleague, Dr. Nada Jabado, a hemato-oncologist at the Children’s and researcher at the Research Institute of the McGill University Health Centre. It was soon discovered that both Year Ny and King both carried a mutation in a gene called HAVCR2. As carriers they had no symptoms. However, they had both passed the mutation down to Thomas and Meagan, but not to their son Brandon.

Researchers confirmed that the mutation was preventing a protein, called TIM-3, from working properly. TIM-3 is an important protein because it helps regulate the immune system and stops it from going into overdrive. When the protein is suppressed or inactive, the immune system becomes completely “unleashed” and T cells are uncontrollably over-activated, resulting in this rare form of lymphoma.

When Dr. Jabado began discussing this case with colleagues in Australia and France, they realized that they too had similar cases of patients with the same mutation, most of whom seemed to be of East Asian or Polynesian descent. They also identified another mutation on the same gene in patients of European origin. In all, 17 pediatric and adult cases were identified and the findings were published in Nature Genetics, a scientific publication.

Most lymphoma cases are treated like cancers, when in reality they may often be intensified responses of the immune system. “We’re now looking into using TIM-3 as a target to trigger enhanced immune responses in patients with cancer,” says Dr. Jabado. “We hope this will provide much better results and fewer side effects than cytotoxic chemotherapy.”

Researchers are now trying to see if patients with autoimmune diseases such as lupus—a disease where the immune system turns against the body itself—may have some TIM-3 dysfunction. This could potentially lead to more effective treatments for various types of cancers, infectious diseases such as HIV, perhaps even malaria, as well as Multiple Sclerosis.

“Our family has been through a lot over the last few years, but we’re glad these findings will help so many other people,” says King. “This all happened for a reason.” 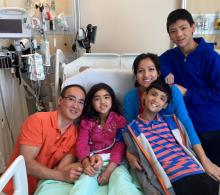