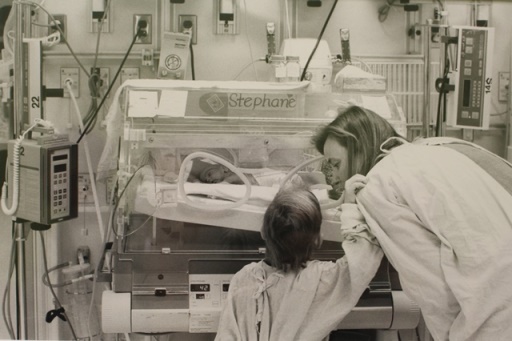 On the wall along the hall connecting the Montreal Children’s Hospital’s (MCH) Neonatal Intensive Care Unit (NICU) to the Royal Victoria Hospital’s (RVH) Birthing Centre, a series of 15 photos entitled Small Miracles is on display. The photos, taken in 1997 by photographer Ewa Zebrowski, whose work can be found in collections across the globe, depict what a typical day in the NICU was like more than 20 years ago. The inspiration for the series was Ewa’s own dramatic deliveries: her two sons were born prematurely in 1983 and 1985 and were cared for in the RVH NICU. Ewa returned to the unit 11 years after the birth of her second son because she wanted to capture the experience from behind the camera.

With the help of Dr. Robert Usher, the medical director of the unit at the time, Ewa was introduced to a family who gave her permission to photograph their son, Stephane Lemoing, who was born at 27 weeks. “My intention was to celebrate the doctors and nurses who care for these infants and to convey what it means to have a child who is born prematurely,” says Ewa. The Small Miracles installation was inaugurated with a vernissage on August 23, 2018, and was attended by physicians, staff and members of the community.

While looking at one of the photos, neonatologist Dr. Daniel Faucher got a pleasant surprise. He recognized himself captured at a distance speaking to a group of people on the unit. “I had no idea I was photographed for this!” he says. There’s a clock in the photo that reads 10:25 which led Dr. Faucher to assume the photo was taken during rounds. He recognized some faces in the photos and with nurses Jennifer Guerrero and Hélène Carron, who also worked on the old unit, he reminisced about colleagues and life on the former unit.

On the eve of the vernissage—after years of not being in touch—Ewa managed to reconnect with the family photographed for her series and asked them to attend the event. Denis Lemoing and Lisa Gillis, Stephane’s parents, were able to attend the vernissage and spoke with pride about their son who is now 21 years old and described as tenacious by his father.

Although Stephane has faced a fair share of adversity throughout his life, he is an accomplished young man. At the age of five he was diagnosed with Asperger’s and autism spectrum disorder. “Throughout high school I felt isolated and school was hard for me,” he says.  However, he refused to give up. In grade eight, Stephane was recognized by his school for his high grades. In grade 10, he was recognized for his perseverance, and in grade 11, was invited to Montreal City Hall to sign the Golden Book, to acknowledge his perseverance.

After high school, Stephane studied two trades, one in general building maintenance and the other in hygiene and sanitation; he received an award of distinction from the city of Lachine for dedication to his work. Stephane now works at Saputo and Home Depot. He keeps busy by cycling, working out, and going out with friends. He hasn’t seen the photo series yet but he recalls a photo of his mother and older brother, Eric, visiting him in the NICU, a souvenir which is safely kept in one of his mother’s photo albums.

Small Miracles is a new acquisition for the hospital and will be on permanent display. “The goal of art in the hospital is to bring a human element to what can feel like an institutional space,” says Alexandra Kirsh, Curator of the RBC Art and Heritage Centre of the MUHC. “This series is meant to remind us of where we came from and that even though technology has changed drastically over the years, the love and care provided to patients has remained the same.” 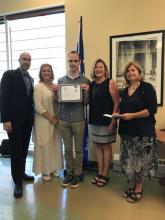