Seven-year-old Stone Rosenberg loves sushi, especially when he gets to share it with the entire surgery department at the Montreal Children’s Hospital. Once a year, the little boy and his family serve lunch to the team who saved his life. Stone’s journey wasn’t an easy one, yet through all the ups and downs, there was always one constant: trust. Trust between his family and his surgical team.

Stone was a small baby. Born premature at 33 weeks, he spent the first month of his life at the Jewish General Hospital. Even though he was growing normally, his medical team was concerned by the fact that he was very constipated. “The hospital ran a lot of tests, but everything came back negative. They thought maybe his intestines weren’t fully developed and eventually he’d outgrow it,” says Stone’s father, Jonathan. But after spending two days at home, watching their son‘s discomfort every time he had to pass stool, they decided to bring him back to the hospital.

He was quickly transferred to the Montreal Children’s Hospital where Jonathan and his wife, Tara Sklar, were told that their son was showing all the signs of Hirschsprung’s disease, a congenital disorder of the colon where nerve cells, known as ganglion cells, are not present, thus causing chronic constipation. But the biopsy came back negative. “We then went back to thinking that he was just a very constipated baby and his intestines needed more time to grow,” says Tara.

Over the next four years, Tara and Jonathan were hopeful that things were going to get better for Stone. They tried different techniques to help alleviate his pain, from stool softeners to rectal irrigation, but he remained very bloated and his cramps were getting worse. His pediatrician suggested they visit the functional constipation clinic at the Children’s, a new multidisciplinary clinic led by pediatric surgeon Dr. Dan Poenaru. “Everything changed after that,” recalls Jonathan.

Dr. Poenaru had spent the last 12 years working in Africa and had treated over 100 children with Hirschsprung’s disease. Stone was showing all the same signs. He suggested they redo the rectal biopsy; and this time it came back positive. “We relooked at the original test and it was in fact negative. The sample must have been taken from a healthy part of his intestine, one that had ganglion cells present,” explains Dr. Poenaru.

After confirming the diagnosis, Jonathan and Tara sat down with a team of surgeons to discuss next steps. “They suggested a colostomy bag, but we wanted to try something else,” says Tara. “That’s when we all decided on surgery. Every decision we made was centered on what’s best for Stone and what’s best for us. They made it very clear that we knew our son best. There was an open, honest dialogue from the very beginning, which led to us developing a very strong relationship. We felt comfortable asking questions and the team was always available to answer them.”

In May 2016, Stone underwent a complex five-hour surgery. Dr. Poenaru and the surgical team removed 15 centimetres of diseased intestine from Stone’s body and then reattached his colon to his rectum. Sadly, the procedure didn’t work. “Even though we removed the diseased portion, because his bowel had been dilated for so long, the rest of it couldn’t work well,” explains Dr. Poenaru. The Rosenbergs were fully briefed and understood what led to the current outcome. “By this point we had learned to take things one day at a time. It was disappointing, but we knew the team did everything they could,” says Tara.

Performing another major surgery was not possible – Stone needed time to heal. The only other alternative was a temporary colostomy bag. “Stone’s colostomy bag gave him instant relief. He no longer had cramps or pain in his belly,” says Jonathan. “He even nicknamed it ‘Stomy’. Funnily enough, it sort of became part of the family.” Even though Stone’s bag was temporary, Jonathan was determined to make sure he could live as normal a life as possible. He spent hours researching different waterproof stoma bags so Stone could continue swimming, and tested dozens of creams to keep his skin clean and healthy around the stoma.

Yet even though Stone’s colostomy bag gave him relief, it also came with its challenges. “We were in the emergency department on a weekly basis, because his stoma kept prolapsing,” says Tara. “I also had to go to his school every three hours to empty his bag.” Then in June 2017, Dr. Poenaru felt it was the right time to try the surgery again, but he needed some advice from colleagues at Sick Kids in Toronto and from the world-renowned Colorectal Centre at Cincinnati Children’s Hospital. “We appreciated how honest he was with us. He didn’t have all the answers and needed some help. It was so real, and only reaffirmed our trust in him and the team,” adds Tara.

Stone then underwent a second, seven-hour surgery; another 17 centimetres was removed from his large intestine. “Dr. Poenaru and the surgical team spent hours stitching him up because they said every single stitch is important. There’s no room for error,” says Jonathan. And thankfully, the surgery was a huge success. Their son was supposed to be hospitalized for 10 days, but he left after five. By July 2, he was out riding his bicycle with his younger brother, Hunter. “Stone is still on the road to recovery, but he’s now a normal kid,” says his mother.

Besides sushi parties, the Rosenbergs also speak to first-year medical students on a yearly basis about their experience and how important it is for doctors to build relationships with parents. “Medicine isn’t perfect; things don’t always work out the way you want them to, but at the end of the day, the trust and the relationship we built with Stone’s surgical team helped us through all of this,” says Jonathan.

“Between admissions and visits to the emergency department, Stone has been in and out of the Children’s over 60 times, but never once did he say he didn’t want to come back or that he was scared,” says Jonathan. “That says a lot about how special this hospital is.” 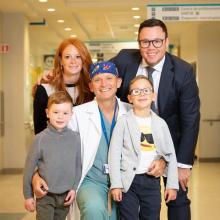