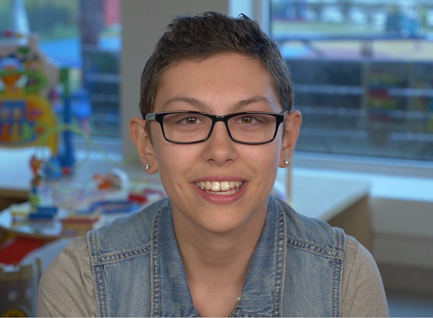 May 1st, 2015 is a date that 12-year old Christina-Maria Dangelas and her mother, Joanna, won’t soon forget. After complaining about a lump on her humerus, a bone found in her arm, a routine X-ray at the Montreal Children’s Hospital (MCH) showed that Christina, a previously healthy and active soccer player, didn’t have a sports injury as previously suspected. She had a tumour on her bone. It was an osteosarcoma, which affects about 3% of children diagnosed with childhood cancer.

Dealing with an unbelievable diagnosis

“It was unbelievably shocking to us,” says Joanna. “I thought, ‘Say that again? Is this a misdiagnosis?’ I had heard of the disease before, but only when talking about adults. I didn’t think this could affect children.”

Within a week, Christina underwent a biopsy and a battery of others tests to figure out the extent of her illness. She and her family also met with Dr. Robert Turcotte, an orthopedic surgeon and musculoskletal oncology specialist at the McGill University Health Centre (MUHC), who explained that while her tumour was barely visible to the naked eye, it had wrapped around her bone and was growing.

“It was so overwhelming in the beginning,” says Joanna, “but we decided to be very honest with Christina. And while she didn’t react initially, she was devastated when we explained to her that she would have to undergo chemotherapy treatments and that she would lose her hair. Even though she was a tom boy, she had just started caring about her looks. It was really hard.”

The long journey through treatment

What was equally difficult was a meeting that followed with Dr. Turcotte to discuss the removal of Christina’s bone tumour, says Joanna. “Christina found out that her surgery would be much more extensive than we had originally thought. Dr. Turcotte explained that he had to remove her humerus, elbow and shoulder and replace it with an internal prosthesis. Christina found that really difficult to accept at first.”

On August 12, 2015, Christina underwent an 11-hour surgery with Dr. Turcotte to remove her tumor while saving as many nearby tendons, nerves, and blood vessels as possible to maximize her arm function. The surgery was successful, and was followed by intensive physiotherapy and occupational therapy to ensure that Christina could regain as much movement in her hand as possible.

Throughout her journey, Christina was also followed by Dr. David Mitchell and Dr. Jitka Stankova, pediatric oncologists and Dr. Pramod Puligandla, pediatric general and thoracic surgeon. As part of her treatment, Christina would have to undergo a chest surgery, as well as 30 weeks of chemotherapy, with each cycle lasting 5 weeks. “She would have chemo the first week, followed by two weeks off, and then 2 to 3 more weeks of chemotherapy followed,” explains Joanna. “Out of a period of 9 months, we spent 7 months in hospital. It was our second home. The nurses, doctors and staff on the unit became like part of our family.”

The light at the end of the tunnel

And then came the momentous day on February 12, 2016: Christina’s last day of chemotherapy. “She was the first patient at the Montreal Children’s Hospital to ring the Bell Fund bell, marking the end of her cancer treatments,” says Joanna. “It was a really happy moment.”

Today, Christina is finished with treatments, and has returned to life as a 12-year old girl beginning high school in Laval with all of her friends. She will continue to be followed on an outpatient basis for monitoring, but her visits are now every six weeks and will be more and more spread out as time goes on.

Despite the emotional and physical strain of her journey with cancer, Joanna proudly reports that Christina finished grade 6 with all of her classmates. “The osteosarcoma changed our lives in many ways, and took away many of the dreams that Christina once had of becoming a soccer player, a lifeguard or even a police officer in the future,” says Joanna. “But she’s kept us going with her will to carry on. Even though she can’t necessarily do all the things she could before, everything now is about remaining active, being with friends and enjoying her family. It’s funny, now that her hair is growing back, the other day she asked me, ‘Mom, can I shave the sides of my head?’ Now I pick my battles!”

In an effort to support the Montreal Children’s Hospital’s Oncology Department, Christina and her family launched the Christina-Maria Dangelas Fund last year, and has since raised over $7,000 thus far, thanks to support from family, friends and her dedicated classmates.