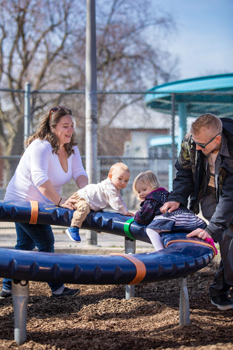 Émilie Ménard knew something was wrong.

During delivery, her baby’s heart rate kept dropping and sometimes she couldn’t hear it at all. When she finally gave one last push, the solemn expression on the nurse’s face immediately caused her to panic.

The nurse placed Éthan on Émilie’s belly and she gave him a kiss before he was rushed to the Montreal Children’s Hospital.

“I didn’t know if I was going to see him again,” she says.

Less than 10 hours after giving birth, Émilie checked out of the hospital and made her way over to the Children’s to be with her son and her partner, Nicolas. She was informed that he was suffering from a serious congenital heart malformation, known as transposition of the great arteries. Éthan’s pulmonary artery and aorta were switched thus changing his body’s blood flow.

In a normal heart, the pulmonary artery is attached to the right ventricle and carries blood from the heart to the lungs to receive oxygen, and then the aorta – which is attached to the left ventricle - carries that oxygen-rich blood to the rest of the body. In Éthan’s case, his main arteries were connected to the wrong ventricles, so his body wasn’t receiving enough oxygen to survive.

Time was also not on their side. Before a baby is born, blood flows from the pulmonary artery to the aorta through an open duct, called the ductus arteriosus, but it closes in the first hours after birth. “We’re able to keep the duct open with medication until the child is strong enough to undergo an arterial switch,” explains pediatric cardiac surgeon, Dr. Pierre-Luc Bernier. “But ideally we need to perform the surgery soon after birth.”

An arterial switch is a complex and very delicate type of open heart surgery. The operation consists of correcting the position of the arteries, and cutting the coronary arteries out of the transposed aorta and attaching them to the neo-aorta.

“We usually perform this type of surgery between the first and third week of life, because we want to prevent the left ventricle from becoming untrained,” explains Dr. Bernier. “Normally, the left side pumps blood to the entire body and is a lot stronger than the right side, which pumps blood to the lungs. In children suffering from this condition, the blood flow is reversed and if it’s not corrected quickly, the left side will adjust to pumping at a lower pressure and will never be strong enough to do the work it’s supposed to do.”

Éthan was lucky to have a ventricular septal defect, which is a hole between the two ventricles that equalizes the pressures and prevents the left ventricle from becoming untrained too quickly; however, this added a level of complexity to the surgery because it would have to be closed at the same time as the arterial switch operation.

On April 3, 2018, three weeks after birth, Éthan was ready for surgery. Leading up to the operation, Dr. Bernier reviewed the case with the Children’s Cardiology team, and also spoke with members of the Anaesthesia department, Pediatric Intensive Care Unit (PICU) and the hospital’s perfusionists. “We also involve nursing in all our clinical discussions, because they work directly with the families every step of the way,” says Dr. Bernier. “Neonatal cardiac surgery is very delicate and extremely technical. The heart is so small. It’s about the same size as the baby’s closed fist.”

Over the next five hours, Dr. Bernier operated on Éthan with help from two surgical trainees, three OR nurses, two perfusionists, one anaesthesiologist, as well as an aneasthesia fellow and respiratory therapist. “The heart is such a dynamic organ and it’s constantly adapting and changing. When going into a surgery, we know what needs to be done, but you have to be able to adapt along the way,” says Dr. Bernier.

While sitting in the waiting room, Émilie and Nicolas were briefed every hour by cardiology nurse Michele Zegray. “We really appreciated the updates,” she says. “We knew he was in good hands.” Émilie was surprised by how calm she felt during the surgery, considering her breakdown the night before. “I was hysterical before the surgery. I couldn’t stand, I couldn’t walk, I couldn’t talk. I didn’t know if my son was going to survive and it was the worst feeling in the whole world.”

When the surgery was finally over, Émilie was brought up to the PICU to see her son. “I wasn’t sure if I was allowed to touch him or talk to him. He looked so fragile,” she remembers. The operation was a huge success. Éthan underwent an echocardiogram before and after surgery to assess the quality of the repair and his heart was now pumping properly.

The team had inserted a set of temporary electrical wires that could easily be attached to an external pacemaker in case his heart needed to be stimulated after surgery – luckily, that was not the case. Éthan’s organs, however, had undergone an invasive, and lengthy surgery and were very swollen. 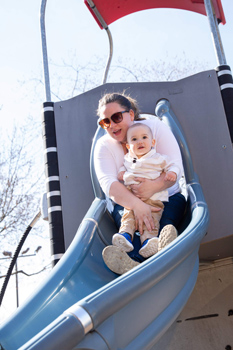 “After a complex neonatal surgery, we sometimes leave the ribcage open, because the organs need time to return to their normal size,” says Dr. Bernier. “Swelling is more significant in a newborn compared to an adult, because there’s less room inside the body. We seal off the area with a silicone dressing to reduce the risk of infection, until we’re able to close the ribcage.”

Six days after surgery, Éthan was doing so well that his medical team began discussing the possibility of him going home. “I couldn’t believe how quickly he recovered,” recalls Émilie. Today, the one year old from Lachine is still being followed by the Children’s Neonatal Follow-Up Clinic, but he’s hitting all of his milestones. “He’s very developed for his age. He even started walking at nine months old!” beams his proud mother. “He’s also very close to his older sister, Éve, and is always giving her hugs and kisses.”

Dr. Bernier says what strikes him on a daily basis is that sixty years ago, children like Éthan would not have survived. “One per cent of babies are born with some type of heart malformation and the most common type of congenital malformation is cardiac. Thankfully, we’ve come a very long way in neonatal cardiac surgery. The complexity of the care provided by our dedicated multidisciplinary team is outstanding,” says Dr. Bernier. “We can’t cure everything, but for Éthan, he will likely live a normal life and that is truly amazing to see and something very special to be part of.”