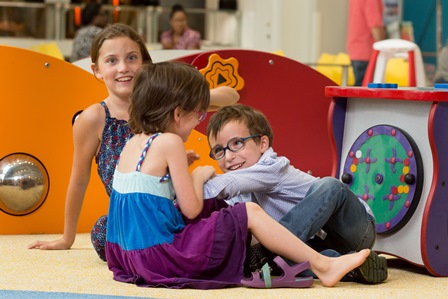 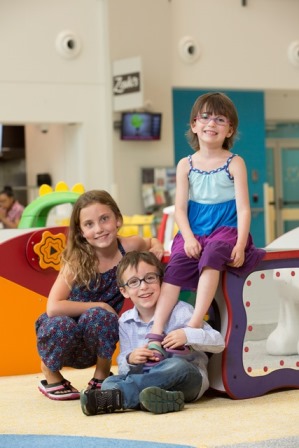 Twins Cadence and Ethan Lenet were about to start pre-K when their mom, Kerry Howard, brought them for a routine eye examination at the optometrist. Kerry was not surprised that Ethan, who had an eye that would look toward his nose when he got tired, was prescribed glasses but was shocked when Cadence was prescribed very thick lenses. “I felt like there was something wrong with her prescription so I sought out a second opinion,” she says.

Kerry went to a trusted family friend, an optometrist who doesn’t usually see children but agreed to examine Cadence and Ethan. Upon examining them, he urged Kerry to go to the Ophthalmology department at the Montreal Children’s Hospital (MCH) as soon as possible. “He put his hands on my shoulders, looked me in the eyes and said, ‘Get Cadie an appointment at the Children’s ophthalmology clinic immediately’,” says Kerry.

Dr. Ayesha Khan, a pediatric ophthalmologist, saw Cadence and took a lot of time to examine her. “This made me panic a little,” admits Kerry. Dr. Khan confirmed that Cadence had papilledema which is a sign of intracranial pressure, a diagnosis that surprised Kerry because Cadence never complained of any discomfort. A few weeks after Cadence had an MRI, Kerry was asked to meet with pediatric neurosurgeon Dr. Roy Dudley and the neurosurgery team.

Cadence’s MRI not only confirmed signs of increased intracranial pressure but also bulging optic discs and a mild chiari malformation which is the descent of the cerebellar tonsils into the spinal canal.  Cadence also had somewhat of a long head shape, suggesting craniosynostosis. “The first thing Kerry told us in the subsequent clinic visit was that she herself had had two surgeries for sagittal craniosynostosis in her first year of life. So we sent Cadence for a skull x-ray and a 3D CT scan of her head, both of which confirmed multi-suture craniosynostosis,” says Dr. Dudley.

Cadence was otherwise well, she did not have headaches or vomiting, she was completely neurologically intact and her development was normal. The childrens’ parents, Kerry and Adam, said they would not have been worried about her at all, however, her twin, Ethan, and older sister, Abigael, often complained of headaches.

With this information, Ethan and Abigael also underwent testing. Even though Ethan had a normal head shape, the tests revealed that he had a more mild case of papilledema than Cadence but a more severe chiari malformation. Abigael’s tests on the other hand, revealed only mild papilledema but an even more striking multi-suture craniosynostosis than her siblings and no chiari malformation at all.

Each child’s case was treated in a different manner. Dr. Mirko Gilardino, a pediatric craniofacial surgeon, operated on both Cadence and Ethan with Dr. Dudley. “Cadence had the more conventional approach which is a cranial vault expansion with resorbable hardware. Ethan though, was a perfect candidate for a posterior cranial vault distraction where we place screws in his skull and his parents slowly expand it to generate new bone,” says Dr. Gilardino. It was agreed that the best approach for Abigael was not to undergo surgery but monitor her as she grows.

Hip Hop to the OR

Hip hop dance is a favorite activity of all three children and thanks to the Parental Presence at Induction program at the MCH, which helps children and their parents get ready for surgical procedures, Cadence and Ethan were able to dance along to their favorite song as they made their way into the operating room. Cadence chose Meghan Trainor’s All About That Base as her song and Ethan, Justin Timberlake’s Can’t Stop the Feeling as his. “On their way into surgery, I played their songs on my iPad and they danced their way down the hall. Everyone in their path stopped and danced too. It was the coolest thing I have ever seen,” says Kerry.

A lot of families with craniosynostosis are referred to the genetics clinic to rule out a genetic cause for the condition. The Lenets present a remarkable case because Kerry also underwent surgery for craniosynostosis as a baby and it is not typical for so many members of one family to be affected. Given all her children are affected, it is extremely likely that Kerry carries a change in a gene that causes craniosynostosis, and that this change got passed onto her children.

Dr. Natascia Anastasio is the resident geneticist working with the family and so far, no gene has been found to explain the condition in the Lenets. The Genetics team tested approximately 20 different genes associated with craniosynostosis and Kerry did not have changes in any of them. “Moving forward we will be guided by new information that comes up. So, it could be that there is a completely new gene that hasn’t been identified yet as being associated with craniosynostosis, and that might be causing the condition in the Lenet family,” explains Dr. Anastasio.

As for the Lenet children, they are healthy and happy. Kerry and Adam are grateful for the care their children received and continue to receive. “Everyone who has looked after our children holds a special place in our hearts. Because of the incredible care they have hadand will continue to receive, they get to keep dancing,” says Kerry.