A cardiac arrest on the ice | Montreal Children's Hospital

A cardiac arrest on the ice 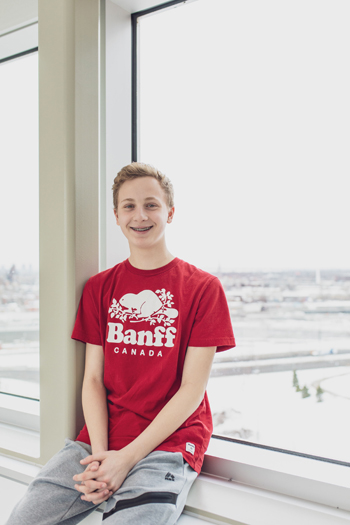 Jacob Dawes doesn’t remember much about the last competitive hockey game he played. The 15-year-old suffered cardiac arrest on the ice and was rushed to the Children’s Emergency after being resuscitated through CPR and the quick use of a defibrillator.

But for a teenager who has played hockey all of his life, the reality of not being able to compete at that level again so early in life remains a shock.

“I’m dealing with it. I’m not struggling trying to deal with it, but it’s big change,” admits Jacob, who has also been forced to rethink his career aspirations of becoming an airplane pilot.  “I was pretty overwhelmed; honestly, I wasn’t sure what to think about it at the time. But I just said OK, I’m not going to let this ruin my life. I take it as a part of me now.”

Dr. Sylvia Abadir says Jacob’s episode is very rare – there are only up to three in 100,000 deaths from cardiac arrest for people under 40 – and the quick-thinking actions of people at the game made a lasting impact on Jacob’s life.

“This sends a big message to the community to use CPR and the defibrillator right away if you see someone drop like that. Resuscitating him so quickly meant he recovered without any neuro deficiencies,” says Dr. Abadir, a pediatric cardiologist. “The event has had a dramatic effect on the life of the family and they have responded very positively. I reminded him that firstly, you’re alive and you will be able to do a lot of things. An optimistic outlook is necessary.”

An optimistic attitude has been right in stride with Jacob’s laid-back, surfer character, according to his father Rodney who was at the game when Rodney collapsed.

“I felt pretty helpless not knowing what was happening, but luckily there were people that did know what to do, which saved his life,” says Rodney, who along with Jacob’s mother Rose and their younger children, have all taken CPR and first-aid training since. “None of us want to ever be caught in that situation again, with that feeling of helplessness.”

In the meantime, Dr. Abadir admits there is no conclusive reason for Jacob’s episode – the entire family was screened and has been diagnosed as asymptomatic. There could be a mutation at play, but now it’s a waiting game until the genetic testing results returns.