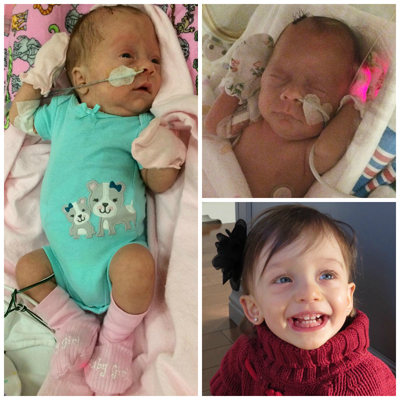 Born prematurely at 29 weeks and 2 days on May 8th, 2015, Siena needed to undergo neurosurgery in early June to treat a buildup of fluid in her brain. But that wasn’t all: doctors soon discovered she had had meningitis after this first surgery, causing the buildup of fluid in her head. She would need subsequent surgeries to have a shunt installed.

“Pediatric neurosurgeon Dr. Jean-Pierre Farmer performed her first surgery and my husband and I were immediately set at ease from his calm demeanor,” says her mother, Tanya. “We knew our daughter was in good hands. Following her first surgery, Siena became a patient of Dr. Roy Dudley. After performing several of her subsequent surgeries, my husband and I could not be happier to have Dr. Dudley follow Siena. He always goes beyond the call of duty to make sure to prioritize what’s in Siena's best interest. Our daughter is now 18 months old and is developing into a beautiful little girl. Thank you to the neurosurgery team.”