Charlotte thrives thanks to expert care 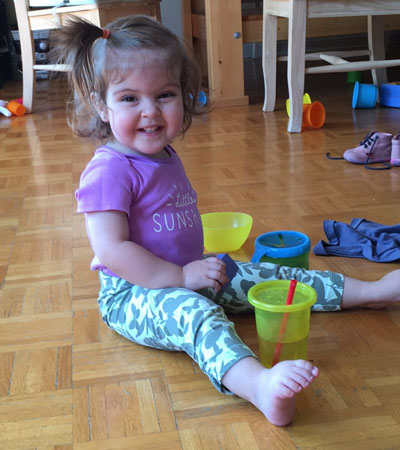 Jennifer and her family were eagerly awaiting their 20-week ultrasound, when the gender of their second child would finally be revealed. Jennifer, a nurse by profession, had just finished a night shift when she made her way to her appointment at her workplace, anxious to find out the news. But during her exam, something alerted the technician that further investigation may be needed.

“She noticed a couple of signs that indicated problems for the baby’s development on the image, and the signs were typically associated with spina bifida,” Jennifer explains. “She tried different angles to see if she could visualize things more clearly, and noticed there was a dimple on the spinal cord. That’s when we were referred to the Children’s to find out more.”

Despite having planned a gender reveal party later that week, Jennifer says she broke down when she saw her husband, Dan, and told him the news. “We decided to open the envelope that revealed the gender alone together, and it revealed we were having a little girl. We decided then and there that unless our child would be unlikely to survive outside the womb, we would do anything necessary to make sure she could have a happy and normal life.”

Just one week later, Jennifer and Dan met with genetic counsellors who helped provide more information on the condition and help guide them in their decisions about next steps. At 24 weeks, Jennifer was sent for a fetal MRI at the Children’s that confirmed the diagnosis: her their baby girl, Charlotte, had spina bifida type 4, the most severe form of the condition.

Hydrocephalus, a condition in which fluid accumulates in the brain, is another problem associated with spina bifida. It occurs when the fluid that goes from the brain around the spinal cord does not circulate properly. Because Charlotte would be faced with this complication immediately after birth, Jennifer and her Dan soon met with pediatric neurosurgeon Dr. Jeffrey Atkinson at the Children’s, who explained how their daughter would need an operation soon after she was born to close the lesion on her spine and possibly a shunt to help drain and redirect fluid from her brain to abdomen, and tried to walk them through what could happen.

“He said every case of spina bifida is like a snowflake,” says Jennifer. “Every person can be different, but due to the area where her spine was affected, she would be most affected in her lower legs and feet. Even though he couldn’t tell us for sure what would happen, we felt reassured knowing that she would be taken care of as soon as she was born.”

Just a few months later at 38 weeks, Jennifer welcomed baby Charlotte at the Jewish General Hospital. “I remember feeling worried about what she would look like when we first saw her. But she looked like a perfect baby when we saw her,” says Jennifer.  “I had time to hold her and cut her cord, and they then bandaged her spine, which was open, and brought her to the NICU where they started her on IV antibiotics before she was transferred to the Children’s.”

Within hours of her birth, Charlotte was taken to the Children’s to undergo an operation to close her back where her spine was exposed. Without this initial surgery, she would be at a huge risk for infection. “Just a few hours later, I was able to be discharged too, and I was able to stay by her side for 9 days in the Neonatal Intensive Care Unit followed by another 4 days on the surgical floor,” says Jennifer. “During those first few days, Charlotte needed continuous monitoring to see if her hydrocephalus (the fluid that circulates in the brain), would remain borderline or get worse.” Given that she was already in hospital and would need to return for a second operation anyway, Dr. Atkinson advised going ahead and performing Charlotte’s second operation -- installing a shunt to help drain fluid away from her brain and spine -- sooner rather than later. “I really appreciated Dr. Atkinson giving us his recommendation, and we’re really happy that we did it when we did. She recovered well and we were able to go home shortly afterward.” 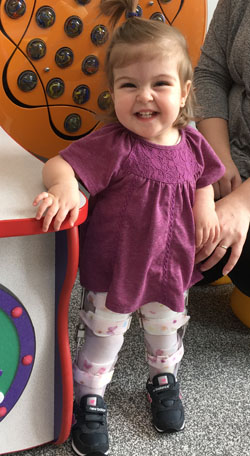 Having the support of a specialized team like the Spina Bifida Clinic has made all the difference for Charlotte and her family, says Jennifer, who credits the team with reassuring her whenever the slightest concern arose. “When Charlotte got sick in the first few months, I often worried about whether it was because her shunt wasn’t working or whether she just had a typical bug that all kids get. Having the team available so we could get answers within 24 to 48 hours always help make me feel reassured. Every time we’ve visited Medical Imaging or other areas of the hospital, everyone has been amazing and accommodating, trying to help us get things accomplished within the same day. It makes a huge difference.”

Now 20 months old, Charlotte is a happy and curious toddler who loves to laugh and be at the center of the action, usually right next to her older brother, who’s 4. While she’s undergone many medical procedures in her young life – 5 surgeries within her first 9 months of life, to be exact – she has continued to thrive and develop thanks to expert care in the Spina Bifida Clinic, where she is seen regularly by a team of specialists every 6 months. “Charlotte has what’s called a neurogenic bladder, meaning she doesn’t feel the urge to empty her bladder, so we were taught how to insert a catheter for her to empty it throughout the day,” says Jennifer. “She also faces a few mobility issues because the muscles in her legs are not as developed due to the lesion on her spine. With the help of physiotherapy, she has made great progress and we can hardly keep up with her crawling all over the house, and we are very hopeful that she’ll be able to walk in her own timeframe.”

“I don’t know how the past 20 months would have gone without all the support we received. We couldn’t have done it without the Spina Bifida team we have behind us, and everyone who has supported us during our journey. We know that Charley will always face some extra challenges but we don’t want her to feel that she’s different or can’t do something she sets her mind to. We’ll always encourage her to dream big and that everything is within her reach.”