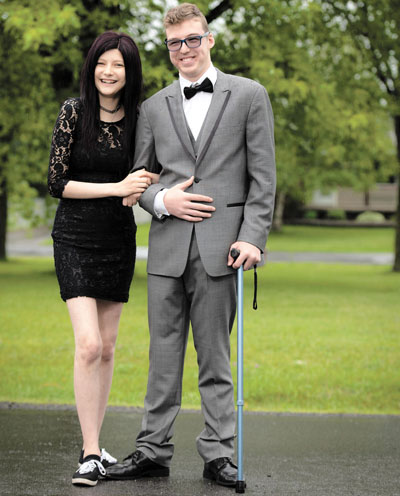 Samuel Boisvert, 18, and Josephine Dorion, 16, became fast friends in the playroom of the Hematology/Oncology Unit at the Montreal Children’s Hospital in 2017. Having both been diagnosed and followed for different forms of cancer, the two were introduced by Child Life Specialist, Anna Paliotti during a weekly pet therapy session to help take their minds off of life in the hospital.

“Going through treatment for so long, it wears on you physically and mentally,” explain Samuel, who was diagnosed with an osteosarcoma, a form of bone cancer in October 2017 after complaining of leg pain. He underwent a 13-hour surgery in January 2018 to remove a tumor and to replace his right hip, femur and left knee. In total, he underwent 41 weeks of chemotherapy and had to miss out on an entire school year. But the worst part, he says, was the ever-present feeling of nausea and exhaustion that would accompany his treatment.

It was a feeling that Josephine, diagnosed with leukemia in April 2018, could absolutely relate to. “Because of my illness, my immune system was often weakened and I’d have to come to the hospital and be placed in isolation almost once a month,” she explains. “I get nauseous and fatigued after treatments too. Talking with Samuel, I could tell him about how I was feeling and he understood more than anyone else because he was experiencing it too.”

“She understands what I’m feeling because she’s living it, and not many other people can relate the way she does,” explains Samuel

When they discovered they lived less than a 30 minute drive from each other, Samuel and Josephine began connecting outside of the hospital too, visiting each other’s houses and attending get-togethers with friends.

It was therefore a no-brainer that Samuel would invite Josephine to prom with him this June, as he celebrates the end of a year of transitioning back to school and embarks on a new chapter. On June 22nd, the pair was photo-ready and all smiles as they celebrated a special milestone with a special Children’s connection.

“I got a lot of help planning what I was going to wear from staff members at the Children’s,” says Josephine with a laugh. “My shoes and my jewelry were all picked out with the help of Connie, the receptionist in the Hematology-Oncology Department.”

It’s no secret that Children’s staff members are just as thrilled when patients get to focus on regular teenage experiences beyond the walls of the hospital. It’s why we do what we do every day, and we couldn’t be more thrilled for Samuel and Josephine this prom season.