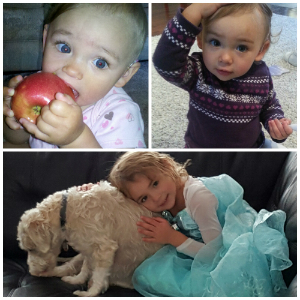 Nathalie Skinner had just given birth to her first-born child, a baby girl, at the Royal Victoria Hospital when hospital staff mentioned the option of performing a newborn hearing screening.  “I knew the test wasn’t available at every hospital, and I felt lucky to have the chance to screen my daughter,” she says.

Just a few hours old, baby Clara underwent a short test called an automated auditory brainstem response (AABR) test that screens for hearing problems. Sensors were placed on the newborn’s scalp and connected to a computer. These sensors measured her brainwave activity in response to little sounds transmitted through small earphones. The results, however, were far from what every first-time parent wanted to hear.

“The test showed negative results for hearing on both sides, showing something was possibly abnormal,” says Nathalie. Answers, however, would have to wait until Clara was around 2 months old to undergo a more comprehensive hearing test at the Montreal Children’s Hospital (MCH).

In order to be able to confirm a diagnosis and understand the extent of Clara’s potential hearing problem, Nathalie was referred to the MCH Audiology department. On her appointment day, she met Suzel Julien, an MCH audiologist for a diagnostic auditory brainstem response test (ABR). “A diagnostic ABR is a test that lasts roughly two hours and is done while a baby is sleeping,” Suzel explains. “By using different sounds, it allows us to determine whether a child has a hearing loss and the nature and degree of loss as well.”

The results were conclusive: at 6 months old, Clara was diagnosed with a profound sensorineural hearing loss in her left ear and mild hearing loss in the other. Nathalie was told it was likely permanent hearing loss, and was referred to Dr. Sam Daniel, an otolaryngologist at the Children’s, to find out more about the cause of the hearing loss.  She was also referred to the Institut Raymond Dewar, a rehabilitation center for speech therapy and for future fitting of hearing aids.

“We knew that Clara could hear a little bit when we whispered loudly in her better ear,” says Nathalie, “but it was only after her diagnosis and having her device that we could really see that she was hearing things she had never been able to detect before.”

Nathalie remembers a particularly heartwarming moment after her daughter was fitted with a hearing device, and they were both in the backseat of the car together. “I turned to hear and sang a song I had been singing to her since she was born, and she just looked at me with big wonder-filled eyes…she had never heard my voice clearly before.”

Today, Clara is 4 years old and continues to be followed in the Otolaryngology department with Dr. Daniel, as well as in Audiology. “We know that as she develops, we’ll have to change her hearing device because in her particular case, her hearing may deteriorate further.” Nathalie says she is particularly grateful for Suzel’s expertise and reassurance throughout her journey with Clara, and says she was again instrumental after the birth of her son, Arthur, who also benefited from a hearing screening. “For now, Arthur does not have hearing loss that we can detect, but he will continue to be tested as he gets older because of his sister’s condition,” she says.

Reflecting on her daughter’s journey, Nathalie says she is thankful that she was able to give birth in a hospital that offered newborn hearing screening to patients – and all thanks to support from the Montreal Children’s Hospital Foundation. “Not all hospitals offer newborn hearing screening in Quebec, and it made all the difference for us,” she says. “Had she not gotten tested, we may never have noticed her hearing loss until much later, and it may have affected her development. Having the information from the beginning changed her life, along with ours.”