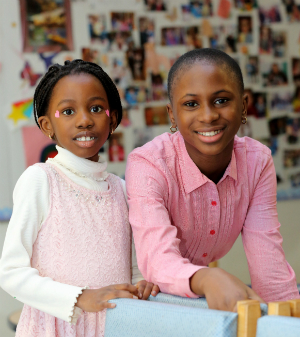 Queen Taire never knew that she and her husband Eddie both carried the gene for sickle cell anemia. Even though she was aware the disease was in her family, Queen had never thought of the possibility that it might one day touch her own life. So when she learned that her first-born daughter Tega had the disease, it came as a complete shock.

Sickle cell anemia is a type of blood disease that a child is born with. For couples who both carry the sickle cell gene, there is a one in four chance that each of their children will have the disease.

When red blood cells are healthy, they maintain a round shape, are flexible, and they carry oxygen throughout the body. In sickle cell anemia, the red blood cells are irregularly shaped, have a shortened lifespan, and they can inhibit blood flow and delivery of oxygen to various parts of the body. This can result in many different manifestations of the disease, most commonly episodic painful crises and increased risk of infection.  Some children have more complications than others, often for reasons still not understood.

Tega was diagnosed with sickle cell at the age of seven months.  The news came after a very difficult day. “She had been crying non-stop and I could tell she was in a lot of pain, so we decided to bring her to Emergency at the Children’s,” says Queen. “They did tests that day and that’s when we found out she had sickle cell disease. It was really devastating.” Afterwards Queen and her husband were tested as well. “The doctor told us we’re both carriers and that’s why Tega developed the disease.”

A stroke at age six

Tega’s most difficult period was when she was six years old. She had been sick and experiencing stomach pain, so her parents brought her to the Children’s. They learned that Tega had fluid in her lungs. She was admitted to the Pediatric Intensive Care Unit (PICU) where she was intubated to help her breathe. Not long after, while still in the PICU, Tega had a stroke, a known complication of sickle cell anemia. What followed was a lengthy rehabilitation period, first at the Centre Marie-Enfant, then at the MacKay Center. “She was so determined to get better,” says Queen, “and she eventually regained her strength and started to walk again.”

Following the stroke, Tega was put on a chronic exchange transfusion program, a process which replaces her sickle cells with normal blood. She receives her treatment every six weeks in the hemodialysis unit at the Children’s, where they use an apheresis machine to help make the process efficient.

Tega has a younger brother Chucko, aged nine, and sister Fejiro, aged seven. Chucko tested negative for sickle cell disease, but Fejiro tested positive for the disease before she was born. Fejiro has never been hospitalized or had any serious problems as a result of the disease.

Both sisters are followed in the sickle cell clinic at the Children’s, and see Dr. Sharon Abish and Marie Gale, a nurse in the Hematology-Oncology division, when they come for check-ups every three months. “The girls are doing very well,” says Marie. “Since Tega has been on the exchange transfusion program we haven’t seen her for emergencies as we did in the past.”

Tega and Fejiro are among 125 patients treated for sickle cell at the MCH. Marie explains that since November 2013, every baby born in Montreal and Laval is being screened at birth for sickle cell disease. The screening process is fairly simple and uses the same blood test that is used for all other screenings at birth. 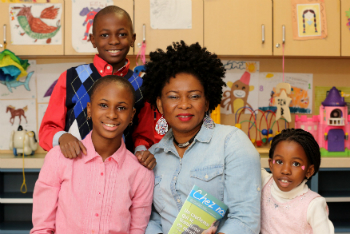 Queen is thankful that her daughters are able to enjoy normal lives despite living with the disease. Fortunately for the family, life at home doesn’t involve any complicated tests. The girls eat a healthy diet and drink plenty of water to stay hydrated. Queen knows what to watch out for, and if either of the girls ever has a fever or any pain, she knows to bring them to the Children’s right away.

Queen has high praise for the team at the Children’s. “Everyone here is so supportive of our family,” she says with a smile. “They’ve done so much for us and still do so much for us. Any time I ask for anything, they are always there and that is very important. They really see you through.”