The Gift of Sound 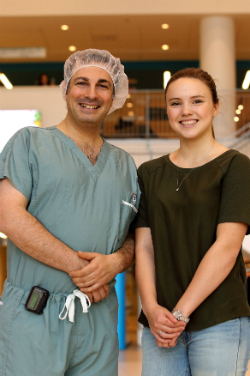 As a toddler, Karina Théorêt’s parents, Stacey Hoirch and François Théorêt, noticed that she wasn’t speaking at the same level as other children her age. Her pediatrician reassured them that it was probably the result of growing up in a bilingual home, and that such children usually take longer to speak. But as time went on, her parents began to fear that something was wrong.

At three years old, Karina was referred to the Otorhinolaryngology department at the Montreal Children’s Hospital (MCH). Doctors confirmed that she was suffering from hearing loss in her right ear. Sadly, it could not be restored. “It was hard news to hear, but we felt reassured to know what the real problem was,” says her mother, Stacey.

Deafness does not run in the Hoirch-Théorêt family and the family underwent many rounds of genetic testing to find out the cause of Karina’s deafness; all the results came back inconclusive. Early on, the family decided not to treat Karina any differently and go on with life as normally as possible. “I only started to notice that I was partly deaf when I got to elementary school,” says Karina. “But it didn’t upset me because I thought it made me special and different.”

Karina started to swim competitively and she excelled in school. As a child, she became interested in studying medicine and would spend hours reading a medical book about the digestive system. “I couldn’t put it down,” she laughs. “I even watched Youtube videos about surgeries and started thinking about becoming a surgeon myself.” Even though school wasn’t a problem for Karina, the classroom still led to some frustrations. “I always had to think about where to sit to make sure I could hear everything properly,” she says. “Or, I’d have to move my friends to my good side, because otherwise I’d be stuck asking them to repeat something three times before I could understand.”

When Karina turned 15 her mother decided to make one last appointment at the Children’s before she became an adult. They met with audiologist Anne-Marie Forget, who explained that there were now different types of technology on the market compared to what was available twelve years ago. She suggested a couple of different alternatives and made an appointment for Karina with Dr. Sam Daniel, Director of Otorhinolaryngology-Head and Neck Surgery at the MCH.

Little did they know that Dr. Daniel had just come back from a conference where he had learned about a new technique called Minimally Invasive Ponto Surgery (MIPS). After meeting with Karina, he determined that she would make a perfect candidate for the surgery. “The procedure had been evaluated in Europe, but this would be the first time it was done in North America,” says Dr. Daniel. 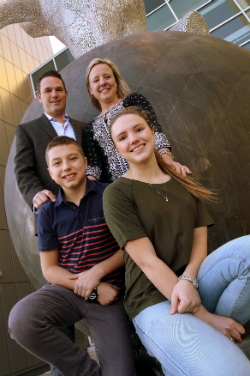 MIPS is designed to minimize complications during and after surgery and leaves no scarring since it’s a suture-free operation. The bone-anchored hearing implant is placed 50 mm from the ear canal and is barely visible under the hairline. The 10-minute surgery only requires local anesthesia and the patient can go home the same day. “During the procedure, the patient may feel pressure or vibrations similar to an electric toothbrush, but they don’t experience any pain,” explains Dr. Daniel.

On November 18, Karina underwent the surgery and was excited to be awake during the operation. “I got to see the inside of an operating room for the first time in my life,” she says. “It was so exciting. I felt like I was in Grey’s Anatomy.” During the operation, Dr. Daniel punctured a small hole in the side of Karina’s head and drilled a screw into her skull. Over the next month, the screw will fuse to the bone and doctors will finish the procedure by attaching a small external microphone that will conduct vibrations through the implant and along her skull. “She will then pick up and process these sounds through her left ear,” explains Dr. Daniel.

Stacey and François are very proud of their daughter and her decision to have the surgery. “Karina read everything she could about this surgery. She made the decision to get the implant,” they say. “We can’t even imagine what it feels like to go from not hearing to hearing.” Of course this also means that things will change around the house for Karina. “I guess I can’t use my deafness as an excuse to get out of doing chores anymore,” she laughs.