Healing the body and mind 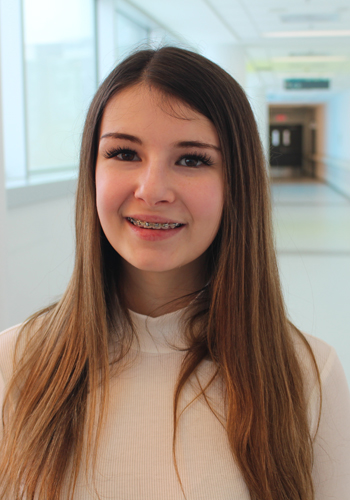 Audrey-Ann is someone who understands how life can change from one day to the next. In August, the 16-year-old was thrown from her scooter in a road accident. She was taken to Hôpital Anna-Laberge before being quickly transferred to the Montreal Children’s Hospital Emergency Department when they suspected she might have a neck injury. There, the Children’s Trauma team was waiting for her. “We saw close to a dozen people when we arrived,” says Audrey-Ann’s father, Danny. “It was extraordinary how they got to work.”

The first few days and weeks after the accident were full. Audrey-Ann had severe burns on her left leg and had to undergo a three-and-a-half hour surgery for skin grafts in three places. Because of a fracture in her neck, she had to wear a neck brace around the clock for 13 weeks. She went back to school in a wheelchair and came to the Children’s frequently for appointments with Plastic Surgery, Orthopedics, and Occupational Therapy. Her recovery was going well but Audrey-Ann was starting to experience other problems.

“At first, I didn’t think the accident had affected me that much but after I started school, I became pretty tired and a bit depressed. It wasn’t going at all like I wanted it to,” she says. “I felt like my head was elsewhere, and that I wasn’t myself anymore.” It didn’t help that she was having difficulty with schoolwork. One day, after completing a French dictée, she learned that she had left out words in some sentences. “I never had any trouble writing so it made me panic a bit,” she says. Her dad says in hindsight, she probably started back too early. “She thought she was ready but the trauma took all her energy, she couldn’t concentrate, she couldn’t write,” says Danny.

One of the Trauma team members suggested Audrey-Ann might want to meet with the team’s psychologist, Dr. Catherine Serra-Poirier. At her first appointment, Audrey-Ann says she still wasn’t doing very well: she was only going to half her classes, not taking exams, and doing no exercise or outside activities. “Nothing interested me,” she says. “I was really stressed and didn’t want to go to school anymore. Catherine told me these were signs of depression.”

A depth of knowledge and expertise

During her PhD studies in Developmental Psychology at Université du Québec à Montréal (UQAM), Dr. Serra-Poirier completed a one-year residency at the MCH. “The rotation is an opportunity to work in many different services at the hospital and determine what our interests are,” she says. Once she’d worked at the Children’s, she knew she never wanted to leave. “It’s an incredible team and there’s a real depth of knowledge and expertise that you don’t find in many places.”

Dr. Serra-Poirier sees trauma as a very interesting and stimulating domain, and a natural fit given her strong interest in psychotherapy and evaluations of complex cases. She also works in the hospital’s Eating Disorders clinic and is currently developing and implementing psychotherapeutic group programs for patients and their parents.

As part of the multidisciplinary Trauma team, Dr. Serra-Poirier often meets with a patient a few days or weeks after their accident. Her patients range in age from four to 18, with a broad range of difficulties related to their trauma, and sometimes pre-existing vulnerabilities.

“When Audrey-Ann first came to see me in the fall she was really in acute stress following the accident. My role initially was to help prevent the development of a post-traumatic stress disorder,” says Dr. Serra-Poirier. “She was still dealing with fear, and had nightmares at times, so a main element of our interventions was directed to that. Among other goals, our work aimed to reinstate a feeling of safety and help her process difficult emotions that accompanied the trauma.

“As the psychotherapy progressed, I could see her improvements. She was starting to show noticeable changes in her functioning,” she says. As Audrey-Ann’s symptoms of depression began to improve, she and Dr. Serra-Poirier then began work on the impact of the skin grafts on her body image. “Audrey-Ann’s progress is an example of how the focus and needs of a patient can evolve as we go, so we often have to change or adapt our treatment plan,” she says.

Audrey-Ann feels that her work with Dr. Serra-Poirier has been very beneficial. “I didn’t always feel that people understood what I was going through, but she listened, she understood, and she helped me feel better.”

Dr. Serra-Poirier explains that their work with patients also involves communicating regularly with teachers and school staff. “Part of this involves helping school staff support children, for example, by ensuring that the child or teen is going at a pace they can tolerate, and that they don’t get so far behind that they face a big uphill battle to get back to a full-time schedule,” she says. By working with the child, parents, and school, psychologists can add important information to provide the best possible treatment.

Audrey-Ann has gradually worked her way back to a full course load, and is about to start writing exams again. Not only is she scheduled to graduate with her classmates in June but she’s on track to start CEGEP in the fall. “I really do feel a lot better now,” she says. “I’m excited for what’s to come.”