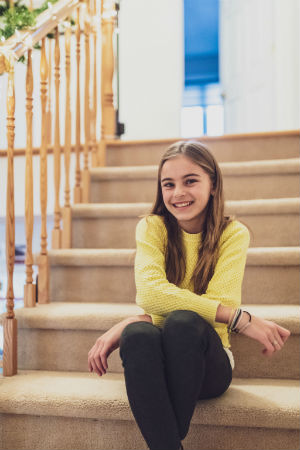 The impact of a nurse’s role in patient care, especially with sick children and their families, can last a lifetime. Charlize Aragona-Turgeon, 12, is a testament to this. Charlize underwent life-saving, open-heart surgery two months after she was born, sending her parents Chantale Turgeon and Mike Aragona on a weeks-long, emotional roller coaster inside the Montreal Children’s Hospital. Uncertainty and fear mostly surround those early memories. But the trepidation they felt quickly evaporated thanks to the efforts of nurse Elissa Remmer, whose tenderness and reassurance comforted the family and contributed to building a long-standing friendship that continues to this day.

“Nurses are everything in the relationship you have with the hospital. Knowing a nurse will look after your child when you have to leave the hospital, watching and caring for them when you are not there is so comforting,” Chantale said. “It’s a calling to be a nurse – they go above and beyond, and matter so much to families.”

The World Health Organization (WHO) is celebrating the work and impact of nurses in 2020 through its ‘International Year of the Nurse.’  The impact of nursing at the Children’s has been felt since 1905 when the hospital opened its own training school. When training moved to CEGEPS and universities in 1970, nurses were able to focus on direct care as the professional role of nurses at the MCH expanded, with a family-oriented approach always being the focus.

For Charlize’s family, there is no doubt this philosophy has had an effect on their lives.

Their odyssey started nine days after Charlize’s birth on June 24, 2007, with her first visit to the Children’s for tests that determined she suffered from coronary heart disease. Charlize was hospitalized in intensive care less than two months later because of cyanotic episodes . On August 30th – the same day as Chantale and Mike’s wedding anniversary – Charlize underwent open-heart surgery to correct a double outlet right ventricle that mimicked Tetralogy of Fallot (a type of heart condition that requires corrective pediatric cardiac surgery). Charlize’s parents were told she would need a pacemaker and that there would likely be complications, including multiple surgeries and even future heart blockages. But heart surgeon Dr. Christo Tchervenkov’s expertise meant Charlize avoided the pacemaker and never suffered any serious complications.

“When Charlize was discharged from surgery to the intensive care unit it was the first time it all sank in for me as a mother. I broke down in front of the nurse’s station and Elissa came to me and pulled me into a room to talk – she basically caught me,” Chantale remembers. “She then kept checking in on Charlize regularly, she would come by and care for her, and when we were first able to hold her again she was the one who brought her to us. She was part of all these critical life moments. As a parent, you think your child is dying and she was like, ‘this is not a problem, we’ll take care of her.’”

“Charlize was such a tough, cute little baby - I remember her smiling so easily even though she had just had her surgery. She wanted to get moving again!” Elissa says. “Getting to know families when they are at their most vulnerable is a privilege that we hold, and one of our great responsibility.”

A friendship is born

Charlize is aware of Elissa’s impact on her family from the stories her parents have recounted.

Elissa is about to celebrate 15 years at the MCH, where she has worked on the surgical unit (which introduced her to Charlize and her parents), as a bedside nurse in the Neonatal Intensive Care Unit  (NICU), a wound care nurse, and with the Acute Pain Service. She is currently a Nurse Practice Development Educator in the NICU. Wherever Elissa found herself working inside the hospital, Charlize and family made a point to visit and catch-up whenever an annual or biannual appointment was scheduled; Mike even got on the phone once from San Francisco when away for work to ensure Elissa knew exactly where Charlize’s appointment was so the visit would not be missed! Elissa cherishes the long-standing relationship she’s developed with the family since Charlize’s surgery and, besides the hospital visits, feels lucky to be able to follow Charlize’s life in person and see her personal feats through social media.

“Guidance and support are key aspects of what nurses do. But, more important, I think, is simply being present and there for families for whatever they are going through. Kids are some of the toughest creatures on earth - parents are often the ones who suffer most as they watch their kids go through surgeries and treatments,” says Elissa. “At its core, nursing is about seeing the humanity in all situations. The Year of the Nurse is a wonderful way to highlight the importance of what we do.”